Does Silence Garner Success in the Digital Age? 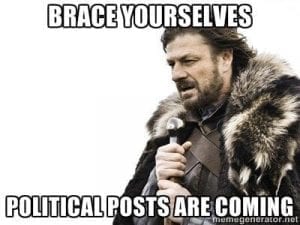 I have this acquaintance. She is a year younger than me and undoubtedly one of the most beautiful women I know; her significant other is equally attractive. Both own their own businesses and generally do very well for themselves by what I can see. Her business is based on her dog, and she’s damn successful at marketing. What I don’t see, however, is anything about her personal views. She doesn’t post about politics or religion. She doesn’t say anything that could ever really offend anyone, except perhaps people who dislike canines. She is, seemingly, perfect. And of course a lot more hire-able than I will ever be.

I see it elsewhere among my peers. Those who would prefer to fit in rather than speak up, particularly on social media. In an age where employers Google you before hiring, it seems like a necessity. It seems like professionalism and political involvement are mutually exclusive items. As if the best type of person is the quiet person. I tend to see this more often with those who are trying to market something, like the “friend” above. When you are your own brand, saying anything controversial can equate to cutting out a whole section of your customer base. And so the question becomes, among those who are very active in social networks, do you make a living or do you make a difference? In other words, at some point for some entrepreneurs, silence equals success.

See: Is it a Good Idea to Share Your Political Opinions Online?

Social media is not going away anytime soon. The internet is how we find people, locate and apply to jobs, communicate with others, and make a living. And alongside that is a big push for less anonymity online. Google punishes anonymous content. Facebook is the epitome of social media as real people; so is LinkedIn. What is a millennial or young entrepreneur to do if they want to be successful? Apparently, they must shut up.

I especially see it among fiction writers. My work with Genre Book Reviews leads me to network with authors and publishers. I enjoy watching the trends that take place within the field. It is very common for authors to write only about fiction, writing, or their books. There are authors on Twitter who, quite literally, tweet about nothing other than their novels. Which I completely understand as a marketing tactic. But at some point we are all citizens and we all need to step up. And yes, you do have the right to do as you please and not get involved. It’s a poor decision, but one you are free to make.

Here at WAL we sometimes talk about our significant others in relation to this “hobby” that is We Are Libertarians. It seems we are all married to someone who isn’t political. My husband, for example, told me the other day that he didn’t have “the luxury” to involve himself in politics like I do. This confused me. He stated that he didn’t have the time to devote to it, therefore he didn’t do it. This is the same man who plays Eve online for a hobby, so I was baffled. Political involvement is not and should not be equated to knitting or MMORPGs. Political involvement affects not only my life, but the life of future generations. My four children have to live in the world that I help shape…that we all help shape. I am of the opinion that we all should learn more about history, political theory, and economics than we know. I say this because only then can we consume media in a way that will empower us to make a difference. Only then can we truly combat the media and the corporate elite. They expect us to be ignorant.

I wonder about what kind of commitment do people think they need to make. It doesn’t help that “Facebook activism” is discouraged. YES we need to rally. YES we need to donate to causes. But I’ll take what I can get, frankly. Because at some point, politics in the United States will become unavoidable. But when that time comes it will be too late.