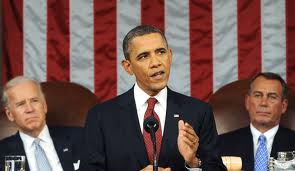 On Tuesday, February 12th, at 8:30pm, President Barack Obama will confront our nation in what will be his first State of the Union Address during his final term as President.

Now, I tend to have a love/hate relationship with these speeches. On the one hand I can definitely appreciate the tradition, and as an advocate of government transparency the idea of our President outlining his legislative agenda to the nation has the potential to be very good in terms of information. On the other hand, the potential for good in these speeches is almost always overshadowed by the cosmetic and insincere antics of politicians.

Here is what has happened in the past – and what will most certainly happen as the President gives his speech in the coming week:

The President will enter a room filled with applause. He will shake hands and give the occasional hug. And eventually he will take his place behind the podium, thanking those in attendance until they stop clapping. The President will then proceed to waste the next 50-55 minutes of prime time television real estate with generic “Let me be clear,” type statements about our nation’s problems that are serious in tone but rarely in content.

During these 50-55 minutes he will be interrupted frequently by a majority of the room – standing (again) in applause to show that they are in agreement with the President’s predictable talking points.

A select few will remain seated – looking disgruntled and unhappy with our Commander in Chief’s words. In this case you will see no less than three shots of Speaker John Boehner rolling his eyes as if disgusted by the President’s agenda. My guess is that this is a purely political move as a picture does say a thousand words, and there will be several cameras flashing.

Speaker Boehner will then stand to applaud other statements being made by the President. These instances are probably political too because not standing during certain comments might create an image of disrespect or insensitivity.

If you think I’m being hard on Speaker Boehner it’s only because his pattern of caving on important legislation after a lot of tough talk and “hard bargaining” has received intense disbelief from me in terms of his credibility.

Once the show is over the President will exit the room, kiss the First Lady, give more hugs, shake more hands, and coverage will immediately go to the pundits for their analysis. The opposing party’s response will soon follow. This is often more entertaining and more worth while than the speech itself.

President Obama has already given House Democrats a preview of his content at their Virginia retreat on Thursday. During this preview President Obama stated: “I’m going to be talking about making sure that we’re focused on job creation here in the United States of America. It means that we’re focused on education and that every young person is equipped with the skills they need to compete in the 21st century.”

Obama was also quoted as saying, “It means that we’re going to talk about, yes, deficits and taxes and sequesters and potential government shutdowns and debt ceiling — we’ll talk about that stuff, but all from the perspective of how are we making sure that somebody who works hard in this country — a cop, or a teacher, or a construction worker, or a receptionist — that they can make it if they work hard, and that their kids can make it and dream even bigger dreams than they have achieved.”

For some this kind of conversation is good. It pulls at the heart strings. It appears (on the surface) to be inspiring.

But for me I’ve long since moved beyond the point of accepting inspiration by the way of a politician’s words. Rather I want to see these things occur in action. Like President Bush before him, President Obama has failed to give me that.

If President Obama focuses on job creation, that’s already a bad sign for jobs. That means that he takes more money – whether by the hand of the American worker, the depth of our national debt, or the value of our currency. He then puts that money into jobs programs. This can temporarily employ people with government funded jobs, but in a nation with our current economic climate, where the U.S. Postal Service could have to stop delivering mail on Saturdays just to save money, how long do you think those jobs will last? The truth is, once the money stops, the jobs go away too.

If he were serious about helping jobs in America he would cease all talks of closing tax loopholes for the various demographics that get them, and he would start talking about opening more tax loopholes for everyone. By that I mean lowering all Federal taxes to the most sincere degree that this could be accomplished.

Let’s allow people to keep their own money. Maybe then they can start to put money in savings. Perhaps then American workers would feel secure enough to start their own businesses, putting more Americans to work, and fueling a competition based marketplace that will drive the American economy to a successful recovery.

Something has to change. My prediction for next week’s State of the Union Address is that it will be indicative that nothing is going to change for the better (in this administration). Nothing good will happen for the cause of Liberty, and nothing good will come for the freedom of the American individual.

Want that to change? Stop voting for the gentlemen in the room that are standing and applauding empty rhetoric. Stop voting for the gentleman that comes on after – opposing the empty rhetoric of the other guys while not actually doing more when he has the opportunity. Use your vote to say one thing. That is, “No more cosmetics. Be real, or you’re fired.”

As you finish reading my State of the State of the Union, feel free to stand and clap. I’ll give my wife a kiss and try to find someone to hug or shake hands with. – Joe