Ruiz: Should Military Chaplains Be Forced To Marry Same Sex Couples? For now. 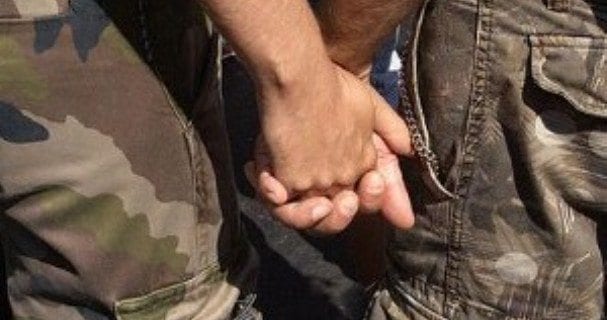 Recently, in the infamous WAL Clubhouse (the ongoing chat where our writers and podcast hosts communicate and prepare their thoughts for upcoming pieces, shows, and more), the following question was raised: “Should military chaplains be forced to marry same-sex couples?”

Later, the question was added (as follows) to the We Are Libertarians Facebook Page. “The Federal Government now recognizes same-sex couples. Should military chaplains (Christian, Muslim, Jewish) be forced to perform same-sex marriages if it violates their individual principles?”

The question has generated a great amount of discussion, and as such I would like to offer my perspective. For libertarians the word “force” immediately draws a red flag (understandably). And yet, even as a libertarian my thoughts might surprise you.

In response to the question, “Should military chaplains be forced to marry same-sex couples,” my answer is Yes (at least for now). In my opinion: As long as publicly paid chaplains are responsible for performing such ceremonies, they are obligated to act broadly in their duties, representative of the entire public. If it is problematic that a chaplain be asked to perform a same-sex marriage, perhaps they should not be in that role.

The following questions and answers represent viewpoints in opposition to my own.

In the Christian faith, Romans 1 suggests that only marriages composed of a male and a female are recognized as Godly. Does that mean that only the pastors who wittingly violate or ignore their personal values should apply for military chaplain positions?

First, military chaplains are not necessarily limited to Christian beliefs. They must accommodate the faiths of all men (or women) who are employed and seek their services during enlistment. They are, in addition to being ministers – public employees, being paid by public dollars.

Should a Muslim chaplain be forced to marry gay couples (then)?

Regardless of the chaplain’s faith, I am talking primarily from a funding standpoint. While I would be against the government telling private churches who they must marry, they are not paid via taxation. If, on a federal level, “government marriage” is moving towards a position of more equality, public employees should not, as a policy, be allowed to discriminate, and the role of chaplain should be filled accordingly. Another solution (if we don’t like that), would of course be that military chaplains are not given the authority to perform marriage ceremonies at all (which I’d be fine with). In that event soldiers desirous of a wedding would have to seek private resources for said ceremonies – when available.

But if government is forcing an individual (the chaplain) to act against their own values? How is that libertarian?

I don’t feel like I’m advocating force here. Gay men and women pay into the system that funds our military just as straight men and women do. Should they be forced to pay only for heterosexual marriages to be performed within the military? In my mind, that would be discriminatory. It’s the same thing as having our public schools teach religion. We all pay into it, so if you’re going to teach it at all, teach all religions equally. Is that 100% libertarian? No – But neither are public schools. So, as long as public schools are going to exist, make them equal. Easy ways to deter conflict regarding the chaplain situation are: 1. Make all chaplains volunteers (external/non-military employees), or 2. Have multiple chaplains of different beliefs, and utilize those whose beliefs match the individuals’ needs accordingly. As stated above, you could also stop all military chaplains from performing these ceremonies altogether.

To paraphrase one of the other WAL Contributors: “Ethics would state that a third-party shouldn’t be able to force anyone to act in any way. But that is built upon the premise of independence. However, if it can be shown that the third-party is actually an involved party, the policy would then be unethical if (as in this situation) gay taxpayers did not have their beliefs represented. If the government would only be in the business of recognizing contracts rather than licensing them, and would stop trying to socially engineer people towards getting married, there wouldn’t really be a problem. (I agree)

Religious freedom is #1 in the Bill of Rights. Where in our Constitution is marriage?

There is a very real disconnect between the way things are and the way things should be – even constitutionally. As it stands a military chaplain gets paid around $23,000 annually. That is of course $23,000 in taxpayer dollars since we (taxpayers) fund the military. The government, representing all Americans, should not violate any person’s guaranteed freedom of religion. The government can (however) choose to give the chaplain’s position to a person who is willing to give equal treatment over the candidate who will not.

Does that mean that the rights, values, and privileges of a gay couple are more important than the chaplains (if he disagrees with gay marriage)?

But aren’t you’re saying that the Federal Government should force one person to violate their own personal values for the benefit of another?

I am not saying that. What I am saying is that hiring practices should either include more chaplains (so that all people are covered), or that only those willing to perform ceremonies equally should obtain the position. That is really the main idea of the stance I am taking here.

In conclusion, I will say also say this. I mentioned earlier that one way of deterring conflict in this situation would be to have chaplains be volunteers/non-military employees. However, with PTSD and Suicide so prevalent in our military; I do think it’s wise to have a spiritual guide there to help ease the conscience of our troops (if they want it). And, they’d almost have to be paid employees (soldiers first, chaplains second) in order to be with the others on the front lines. Of course, so much of the suicide/PTSD could be avoided if the US would refrain from getting into so much of what we get ourselves into, but that’s a different debate altogether.

Whether on the We Are Libertarians Facebook page, or in the comments section here on this article, let me know your thoughts on this issue. – Joe