The staunchest defenders of the NSA have insisted from day one that Congress was aware of the NSA surveillance programs and the representatives provide through oversight over these activities. President Obama sought to reassure the American people with such sentiments after the initial NSA stories first broke:  “These programs as subject to congressional oversight and congressional reauthorization and congressional debate,” the President explained. “And if there are members of Congress who feel differently, then they should speak up.”

Congressman Justin Amash has just spoken up.  Last night he provided proof that information about these programs has been withheld by the House Intelligence Committee. 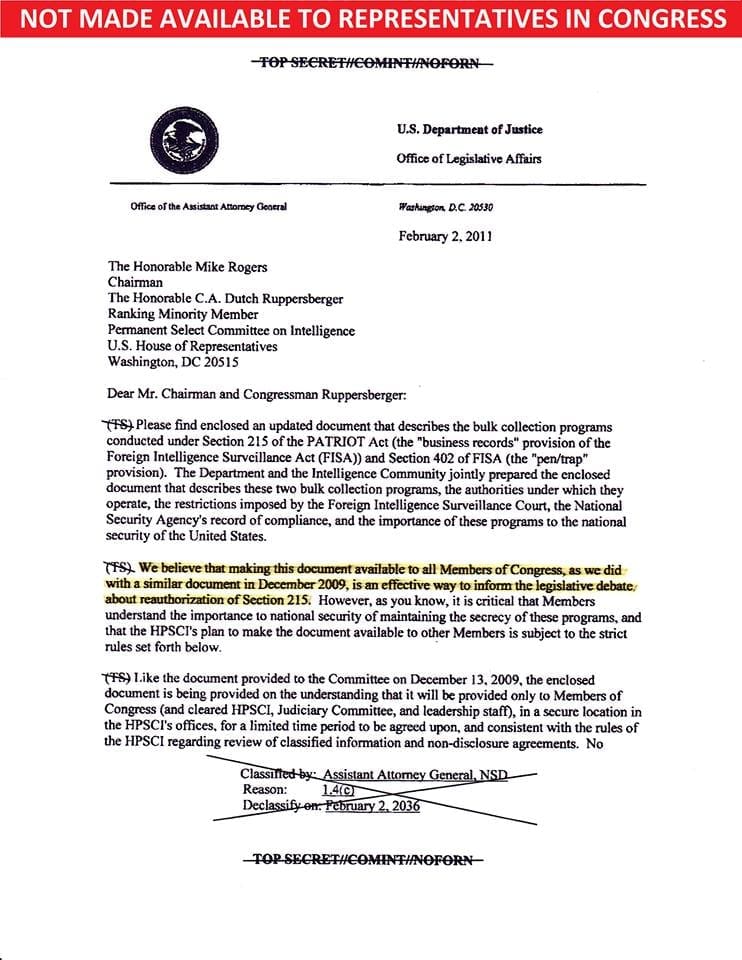 This is a cover letter addressed to Chairman Mike Rogers and ranking committee member Dutch Ruppersberger sent on February 2, 2011 by the Office of the Assistant Attorney General. The letter was sent along with documents that detail the bulk collection activities (phone records) authorized by Section 215 of the Patriot Act and Section 402 of FISA. The second paragraph clearly notes that the declassification and release of information was intended to give Congress information to perform oversight on the programs:

We believe that making this document available to all Members of Congress, as we did with a similar document in 2009, is an effective way to inform the legislative debate about the reauthorization of Section 215.

However, the Chairman of the House Intelligence Committee, Mike Rogers (R-MI) never bothered to release the information. According to a post on Amash’s FaceBook page, the documents declassified and released by the Office of the Assistant Attorney General were never made available to Congress:

“Less than two weeks ago, the Obama administration released previously classified documents regarding NSA’s bulk collection programs and indicated that two of these documents had been made available to all Members of Congress prior to the vote on reauthorization of the Patriot Act. I can now confirm that the House Permanent Select Committee on Intelligence did NOT, in fact, make the 2011 document available to Representatives in Congress, meaning that the large class of Representatives elected in 2010 did not receive either of the now declassified documents detailing these programs.”

This is not the first time the House Intelligence Committee has been criticized for a lack of transparency. The Guardian reported that Alan Grayson (D-FL) had similar issues with getting documentation from the committee.  Grayson requested information in June about FISA court opinions related to the collection of American telephone records and details about the PRISM program:

On June 19, Grayson wrote to the House Intelligence Committee requesting several documents relating to media accounts about the NSA. Included among them were FISA court opinions directing the collection of telephone records for Americans, as well as documents relating to the PRISM program.

But just over four weeks later, the Chairman of the Committee, GOP Rep. Mike Rogers, wrote to Grayson informing him that his requests had been denied by a Committee “voice vote”.

In response to his request being rejected, Grayson approached Dutch Ruppersberger (D-MA) who told Grayson that “he was unaware of any committee action on this matter.” After asking for the details of the “voice vote” Grayson received the following response:

Thanks for your inquiry. The full Committee attends Business Meetings. At our July 18, 2013 Business Meeting, there were seven Democrat Members and nine Republican Members in attendance. The transcript is classified.”

By hoarding information, the House Intelligence Committee has made it difficult for representatives on “the outside” to provide oversight to the NSA surveillance programs. Perhaps that is the point. They clearly want an iron grip on the NSA narrative, but withholding declassified documents and denying information on FISA and PRISM to representatives could bring that control to a halt. When people realize you are keeping information from them that they have a right to know, they typically want to know why.

This kind of behavior from the House Intelligence Committee begs the question:  By how large of a margin would the Amash amendment have passed had all 435 representatives known all of the facts? Hopefully we get an answer to this question in the not too distant future.