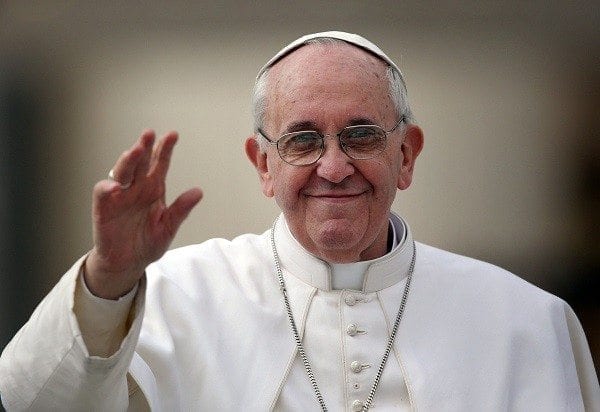 Earlier today, Slate’s Matthew Yglesias wrote an article titled Pope Francis Strafes Libertarian Economics. This was not necessarily surprising since left leaning media outlets such as Slate, Salon, and Demos have recently discovered a truth which has long been understood by those of us at We Are Libertarians. That truth is, “Trolling Libertarians = Site Traffic.”

The article was humorous in its voice. While reading it I imagined a child who had just been handed a stellar report card. Anxious to receive praise for his efforts he excitedly runs home to show his mother. Likewise, I could see Mr. Yglesias reading Pope Francis’ words and racing to his computer to write; eager to ruffle libertarian feathers and brag to his friends about how Jesus endorsed socialism.

But reading Pope Francis’ words did warrant pause rather than an instant reaction. Upon reading them I took a moment to gather my thoughts. Now, after hours of reflection I have decided (for those curious) how libertarians should best approach this.

In order to best respond to Yglesias and others like him, libertarians need to approach Pope Francis, and the herds of happy liberals, tightly clasping their divine authoritarian report cards, as separate objectors. Pope Francis comes from a place of humble yet misguided, good intentions. Excited liberals; fully prepared to ambush Reddit and other social media sites are seeking to say “I told you so.” If only it were that easy.

Let’s examine some of Pope Francis’ words; some of the same words used in Matthew Yglesias’ Slate piece.

“How can it be that it is not a news item when an elderly homeless person dies of exposure, but it is news when the stock market loses two points? This is a case of exclusion. Can we continue to stand by when food is thrown away while people are starving? This is a case of inequality. Today everything comes under the laws of competition and the survival of the fittest, where the powerful feed upon the powerless. As a consequence, masses of people find themselves excluded and marginalized: without work, without possibilities, without any means of escape.”

The first sentence is more of a cultural matter than a political matter. An elderly person dying is absolutely more devastating than a tick in the stock market. However, stocks imply investments, investments imply personal wealth, and personal wealth implies an individual’s means of supporting his or her lifestyle. Lifestyle refers to how a person eats, lives, enjoys, consumes, and prospers. And yet the media chooses to report market news presumably because they believe that is where their readers, listeners, and viewers are the most fully invested. To that Pope Francis would probably find the real problem. People need to be more invested in people. Legislation can’t change that, but Pope Francis can. He can be an example above most others in terms of what it means to care about his fellow man. His stage is large and people are obviously watching.

Further, Pope Francis goes on to say, “Can we continue to stand by when food is thrown away while people are starving? This is a case of inequality.” Perhaps, but who creates inequality?

I spent seven years working with the at-risk youth in my community in a residential facility. Every day large quantities of food were thrown away; so much, in fact, that on more than one occasion employees inquired about the food, offering to transport it to local homeless shelters rather than having it thrown away. This would have meant three things. 1. The food would have served a better purpose. 2. The youth in our facility would have known the consequences of doing good for those in need. 3. The homeless in our community would have had access to a large amount of food that they would not have otherwise had.

Unfortunately employees were told that, due to government regulations the food had to be thrown away. Transporting it from Point A to Point B might cause a reduction in temperature which could breed bacteria, making it unsafe for consumption. That was laughable. Our facility was no more than 5 minutes from the homeless shelter. Could a five minute car ride really be that much of a health risk that the risk of hunger was more worthwhile to those that needed to eat? And so government allowed for more hunger by not allowing a private solution.

Another example is a church in our community that offers financial assistance to people who can show that they are doing everything in their power to get by. Even though their assistance is private, they too are bound by certain government regulations. For instance, a single mother walked in one day requesting help with her electric bill. After examining her income versus the bills that she needed to pay it was discovered that she would still have $25 dollars leftover with which to pay her electric. While this would not have paid the entire bill the church declined her application stating that she would still have $25. Upset, the woman made the case that with that money she would also have to pay book rental for her child. She also stated that he needed a new pair of shoes because his were worn. The church employee apologized stating that due to government regulations they were not allowed to help her since she had leftover funds. What did they do instead? They gave her an application for more government assistance.

Pope Francis continued, “While the earnings of a minority are growing exponentially, so too is the gap separating the majority from the prosperity enjoyed by those happy few. This imbalance is the result of ideologies which defend the absolute autonomy of the marketplace and financial speculation.”

Occupy Wall Street participants referred to that as “The 1%.” Political talking heads have referred to that as the deterioration of the middle class. Either way you word it that minority deserves to be examined. If you look closely you would probably find public employees, like our congressional representatives, who are paid significantly and given lifelong pensions on the public dime for their “service.” They are also exempt from controversial laws like Obamacare.

You would also find the owners of large corporations who give generously to political campaigns, whose favors are returned by legislators once in office. And yet, is that capitalism? Hardly. To pass corporatism off as “unfettered capitalism” would be a sham designed only to turn the lesser informed against the ideas of free markets.

And so I return to Pope Francis’ earlier words. “Today everything comes under the laws of competition and the survival of the fittest, where the powerful feed upon the powerless.” I would argue that the powerful are the lawmakers. The powerless are the poor, and in some cases as demonstrated above, those seeking to help the poor.

Despite Pope Francis’ intentions we should be hesitant to ask for more political help to solve these very real problems. In addition, we should be downright opposed to further redistribution of the wealth.

Some of the greatest crimes against man have been allowed by government. In Nazi Germany their government was the purveyor of great evil. In the United States slavery was once legal. There was a time in America when a white business owner attempting to give service to a black customer could have been prosecuted. And, in the examples above, private institutions refused to help people in need with the resources they had because they were afraid of disobeying regulations put in place by the government; essentially making it illegal to help.

If I were Pope Francis I would maintain that there is indeed a problem, but the problem cannot be solved by asking politicians to fix cultural ills. Rather, I would say that government is the cultural ill. Reducing the size, scope, and power of governments everywhere is the only chance we have at realistically getting to a place where neighbors can be neighbors again. Though his overall message of “Money must serve, not rule” is a fantastic and beautiful sentiment (one that I happen to agree with), I believe that Pope Francis’ prayers would better be answered in a time and place where an angel next door has a blessing that can be legally accepted.