Look Out Limbaugh, Chicks on the Right Hate Women More Than You Do… 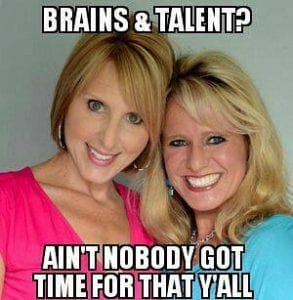 Like any self-respecting woman, I read the much talked about debut post by Chicks on the Right on the Indianapolis Star’s website. Being the only major, local paper (the Indy Star), one does not have many options. The post was a good introduction to the kind of writing that the Indiana-based Chicks on The Right do. Which is to say, vitriolic. I mean, they really give Ann Coulter a run for her money! But where Ann is just one woman, Chicks on the Right (aka COTR) are two blonde “libtard” bashers. Smexy.

So they begin their op–ed, “Here’s What Real Feminism Looks Like” with this:

The word “feminist” has been hijacked by liberals, and we’re taking it back.

I mean, even their lede is full of drama!  Their premise is that feminism was originally a conservative idea that was then “hijacked” by “liberals”, which requires rescuing like a long-locked damsel in distress. I mean, what’s wrong with a premise like that, other than every single part of it? The history of feminism is long and has nothing to do with conservatives, unless you count the women who lead the fight for prohibition as conservative (which I wouldn’t since they literally stood up to their husbands to be political activists). What about other historical “feminists?” Kitty Marion, Elizabeth Cady Stanton, and Madame Wei Tao-Ming were NOT women that fit the conservative mold. Some were allegedly even lesbians. These were women that did anything but protect tradition. Conservatism is by definition an ideology that favors tradition (“the disposition to preserve or restore what is established and traditional and to limit change.” source).

Conservatism is, at its core, a lack of conscience, and it is anything but what the libertarian woman stands for. As a libertarian woman, I don’t feel the need to (so hatefully) bash other women in the process of advancing liberty. My liberty is not advanced by trampling on people. My inherent worldview is that women, even women like COTR, have a right to be hateful. If women do not wish for an abortion, I will not push them to have one. If they do not wish to teach their children that all humans have inherent worth, who am I to force them? I can discuss rationally with them, and I can empower my own children with the kind of peaceful discourse I want to see in the world. What Chicks on the Right and women like them don’t have a right to do is go along without any sort of rebuttal. They don’t have a right to spew hatred unchallenged. Nor will they or the Indianapolis Star receive financial support by way of donations or subscriptions from this chick.

The fact that these women have decided to “take back” feminism shows that feminism has succeeded.

Feminism has long sought to empower women and give them a voice. To help women stand up for their rights, beliefs, and interests. And if even conservative women feel the need to embrace the ideology, then feminism is not dead.

On the other hand it seems that they really took to heart the brand of feminism that really hates women. I’m not sure who is worse when it comes to woman-bashing: Chicks on the Right, or Rush Limbaugh. At least with Rush we can just call him a schmuck and keep on moving. What’s your excuse, ladies? Laziness? It’s easy to only take cheap shots a la Rush, Ann Coulter, and others. It’s like kicking a guy in the groin and claiming victory. Sure you win, but did you play fair? Where’s the real discussion? And how does simply bashing other women, particularly women who don’t subscribe to your version of politics, really advance feminism? So we all sound like “screeching harpies.” Great. That works for feminism. Why don’t we just throw tampons at each other while we’re at it?

If real feminism is anything, it is embracing the idea that women really are a versatile lot. It means that my brand of womanhood won’t match someone else’s. My brand of womanhood is different than Gena’s, Miah’s, or my mother’s. If there is any brand of feminism I can get behind, it’s that one.

The Indianapolis Star took on a guest columnist who wrote a follow-up to the original article, “Why The Chicks on the Right are wrong”.

And they also posted a few letters to the editor:

“What do Chicks on the Right think about abortion, birth control?”

“Chicks on the Right showed arrogance”

“Planned Parenthood CEO: Chicks on the Right Wrong about Feminism”

Of course, so did XO Jane, “‘Chicks on the Right’ Think Liberal Feminists Are Doing it Wrong”. And Jezebel, “Conservative ‘Chicks’ Finally Explain, Like, The Rules of Feminism“.

And Punchnel’s : “An Open Letter to Chicks on the Right”

And Total Frat Move: “Chicks on the Right Explain why Liberal ‘Feminists’ Have Tarnished the Word”

And Nerdy Feminist: “Chicks on the Right…You’re So Wrong”

Thankfully for all those who just can’t get enough of Ann Coulter-wannabes, Chicks on the Right also wrote a follow-up piece: Settle In, Folks. It’s Our Official Response To Our Indy Star Column Detractors.