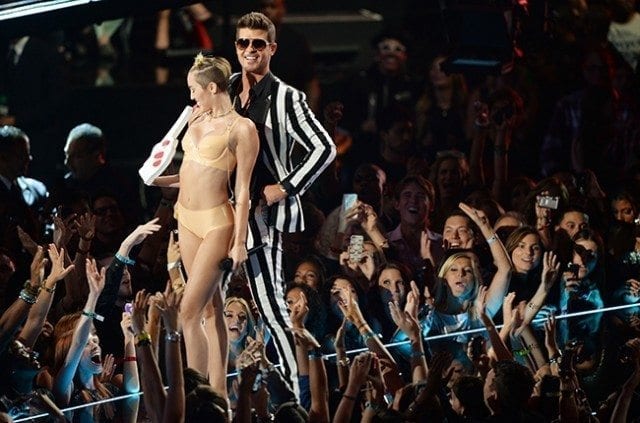 Miley Cyrus has been getting hammered on Facebook and Twitter for her risqué performance at the MTV Video Music Awards.

Conservative writer Monica Boyer, author of the book Not on My Watch: A Mom’s Fight for the Heart and Soul of Her Country insisted that Cyrus had gone “too far” in her recent blog entry. (See monicaboyer.com)

In the same article Boyer told the following story about cancelling her cable services two months ago:

“I told her (the cable sales representative), “Ma’am, I have a very specific message for you to deliver to your network, DISNEY. You can inform them that THEY are the reason we are leaving. When they decided to comply to the gay agenda and bring in a gay couple on the show “Good Luck Charlie” We made our final exit.”

A person like Boyer, a self-proclaimed social conservative, might have potentially been offended by other moments from the awards show as well. Those moments might have included:

1. Macklemore:  In his performance of “Same Love” – Macklemore (refreshingly in my opinion) advocates tolerance regardless of sexual orientation and humanity, phrasing “Whatever God you believe in, we come from the same one.”

2. Bruno Mars: In his performance of “Gorilla” (my favorite song from that album), Mars encapsulates Fifty Shades of Grey into a three-minute tune which glamourizes rough sex.

3. Kevin Hart: During his segments he reminded the audience that he was “not hosting the show,” and publicly complimented Lady GaGa’s “ass.” He also threatened Selena Gomez and Taylor Swift with an “Amber Alert type situation” warning them not to spend time with Robin Thicke.

4. Robin Thicke: During his collaboration with Miley Cyrus, Thicke not only allowed her to ‘twerk’ on him, but also performed unaffected as she rubbed a foam finger across his inner thigh and postured as though she were licking his neck. All the while he sang the words to his massive hit, Blurred Lines (“I know you want it. I know you want it.”)

But Boyer (and many others left those alone). Despite all of things that could have upset those who claim a socially conservative ideology, Miley’s performance was reported to have brought in over 300,000 Tweets per minute – significantly more than Justin Timberlake’s performance, which was arguably the best of the night. Of those Tweets, the focus was clearly on Cyrus’ promiscuous performance, and not at all on Robin Thicke, who was every bit as involved in the show as Miley. This was certainly true in Boyer’s blog.

Boyer continued, “I am deeply grieving that we as women have stepped aside in mentoring our daughters and teaching about purity – how precious modesty is. We have let MTV take over our jobs. When I saw this display as a mom, I just wanted to grab her, wrap a blanket around her and tell her that she is beautiful, that modesty and purity is something to be treasured. If I had 10 minutes with Miley, I probably would just wrap my arms around her and say… you are loved, sweet, sweet girl.”

Side Note: I highlighted the words “when I saw” because the first thing I thought about when I read this was her cancelled cable subscription. She could have watched it online of course, but why would she? Knowing her arguments against cable, why watch an MTV awards show? If you believe the things that Ms. Boyer believes, aren’t you setting yourself up to be offended? At this point in American pop culture, you know at least some of what you’re going to get when you turn on an MTV awards show (Britney kissing Madonna, a bare-assed Howard Stern, etc.). Right Monica? But back to my point:

Whether I agree or disagree with Monica Boyer specifically on the Cyrus performance is not the point I am looking to make here.

My point is, why is Miley taking all of the heat? I was more concerned with Robin Thicke, who I know to be married to actress Paula Patton. Cyrus is a single 20-year-old woman who still has some growing up to do. Thicke (who I’ll admit is one of my favorite artists) is a married man. To me that is more deserving of our scrutiny. I know how much I love my wife, and how there is probably nothing that I value more than our marriage.

So why (with all of the other televised offenses) is Miley’s romp about the Brooklyn venue in her underwear the most publicized (and demonized) at the event?

Could it be it’s because she’s a woman and that we live in a society that doesn’t hold men accountable to the same standards as the ladies? That’s my speculation.

To that some might say, “Well no, because Miley took it way further than any of the men on stage last night!”

But I guess it all depends on your values and what you find to be a big deal. For me, marriage comes first, and thus my boy Robin Thicke is the guiltiest of all from the 2013 show. Second in terms of my values and personal priorities is treating ALL people with love and dignity. When I see Monica Boyer write something like, “the gay agenda” with such a hateful tone and implication in her words, it negates all of the love and sensitivity that she attempts to project in her writing thereafter.

Ms. Boyer and I probably believe in some of the same things (family, loyalty, goodness, and self-respect), but we approach them differently. While Monica seems more comfortable shaming the actions of others, painting herself as a wholesome person at the expense of someone else’s life choices, I endorse free will – and adopt a less judgmental approach of Ms. Cyrus. Miley’s young and she’ll figure things out along her journey. Being okay with that affords me (and Monica) the ability to teach our children as we see fit, raising them according to our own values.

In the long run, spitting in the face of anyone today makes you a less effective messenger of love tomorrow.