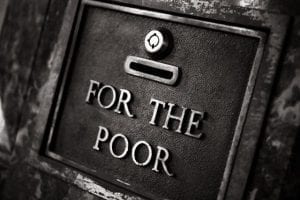 As a Libertarian who frequents right-leaning, left-leaning, and independent news sources on a daily basis, I sometimes get to hear what people think of libertarians. The left is particularly angry with libertarians and tends to throw out this insult:

The aforementioned qualifier is a common descriptor of libertarianism. Of course, it is also assumed that all libertarians are conservative and that we all love people like Rand Paul and Paul Ryan. If you’re here because you think this, then stop and remember: broad generalizations do not work. Got it? Good. Some libertarians are indeed egocentric people. It happens to every party, even yours. It also happens that many libertarians are so keen to talk about what they don’t want government to do that they neglect to talk about what we as private citizens could do instead.

I was reminded of this thought when I heard [Republican] Thomas Kersting talk about children and school lunches:

Now I do not deny that there exist libertarians (“conservatarians”) who’d probably agree with this guy. I don’t. At least, not the spirit of it. First, the children who go without already live a life of teachable moments. When I was a kid, there was a time when we had no money, at least not for my lunch. So I took an apple to school. Someone stole my apple so I had nothing to eat. I felt humiliated but did not tell anyone. Finally a teacher came and purchased a lunch for me. I remember that moment. If shame is supposed to be a motivator, then I get why someone should say this (yikes). But in my book that’s not the type of new generation I want to create as a parent and American. The only shame should be the man who boasts about childhood hunger as if it’s an honorable thing to cut kids off.

Now, as far as the problem of childhood hunger. It exists whether we fund poverty programs or not. It always has. What we as libertarians should do is advocate for community-based solutions. What part of the school’s budget can help? Can  local organizations help? What about a faith-based organizations? The local community is best able to identify and overcome these issues. Shaming children (and their parents) doesn’t do anything.

Thing is, being a libertarian is more than getting government out. It’s getting good people in so that “we-the-people” can effect change in the world (as communities) in a way that our government never will. That is libertarianism.

Instead of talking about shaming kids, Mr. Kersting, how about we talk real solutions? Or even the causes of poverty? Or the ineffectiveness of reduced lunch programs? The solution should never be the equivalent of a dunce cap or “poor people deserve it” Solutions can be had if we want them badly enough.