Ripley: A Hangout with Gary Johnson 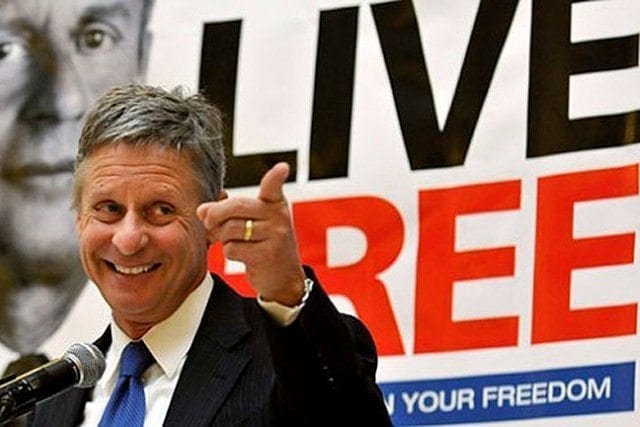 Last week, 2012 Libertarian Presidential Candidate Gary Johnson spent an hour fielding questions from fans online in a Google Hangout. The former two-term New Mexico governor was asked about a wide range of issues including the NSA and education.

Following the 2012 campaign, Johnson told Forbes that “he would engage, with increased intensity, the social media following that he built up over the course of his campaign.” He’s enjoyed an increase in popularity since 2012, growing his platform of followers to over 1.3 million people.

“I recognize that to not do it would be stupid on my part, Johnson continued in his Forbes interview. “This is just a real gigantic missed opportunity if I do not become engaged with it myself.”

His supporters agree. During the online chat session the most popular questions were about Johnson’s political future. As the current chairman of The Our America Initiative, he could not directly endorse candidates or discuss future political plans, but he didn’t say no either.

Johnson was clear that he is “not the guy” for congress.  The primary focus of a congressman is to “bring home the bacon.” The correlation between gaining votes and pork projects is counter intuitive to his stance on reducing the debt. However, Johnson did not discount the possibility of running as a Republican for either president or governor in the future.

The conversation shifted to liberty minded Republicans like Rand Paul who support limited government and Ted Cruz who has been vocal about eliminating the IRS. Some on the Google Hangout believed that they are the only way for liberty to thrive in Washington D.C.; Johnson disagreed.

“All of the Republicans that label themselves as Libertarians – really every single one of them has a social agenda that I do not feel is applicable to the Libertarian Party,” Johnson continued. “As a Libertarian it is just as important to me to be socially accepting as it is to want to balance the federal budget and be fiscally conservative.”

When the conversation shifted to education, Johnson’s past experience as a state governor brought to light several important points about school choice and why the federal government needs to “completely get out of education.”

“What people don’t recognize is that it costs money to take federal dollars for education. For every 11 cents received there are 16 cents worth of strings attached. So getting rid of the federal government would free up more money for education,” Johnson explained.

Johnson was outraged over the recent NSA stories centered around spying on U.S. citizens and was equally vocal about the FISA Courts and the Patriot Act infringing on our rights to privacy. He questioned “Where is the due process? Where is the oversight?” He finally asked, “Why isn’t this transparent?”

Hopefully Johnson is right to predict that the country will “finally have a dialogue on the data collection.” He noted, “People were oblivious, and now are shocked.”

Johnson believes that scandals like this increase the interest in the Libertarian party. “I wouldn’t discount a libertarian nominee for the Republican Party.” Ultimately, the Libertarian Party as “the viable third-party” is what Johnson said could be best for the country:

“If you had a libertarian president you could challenge democrats on the social issues of the day like marriage equality, military intervention, and drug policy – the things that democrats are supposed to be really good at. Then you could challenge republicans to do what they are supposed to be good at which are dollars and cents,” Johnson concluded.  “A Libertarian president could bring out the best of both parties.”

Check out the entire Google Hangout with Gary Johnson below: