Forgive me if I betray my Baptist upbringing in this post.

Anyway, here goes: Advocating for self-government is like a fire extinguisher.

Let me back up. Advocating for self government is like THIS fire extinguisher: 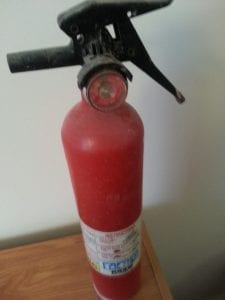 What does this have to so with liberty, you ask?

See, there are government regulations regarding fire extinguishers in apartments. At least in some areas there are. And I am pretty sure the apartment management has private rules as well. Did either of those things, while well-intentioned, protect my family from the state of affairs upon move-in? No. I only found it because I am so short that I can actually see underneath the sink as I put items away. In other words, I would never have known that I needed to replace it if I hadn’t checked myself.

But even if I didn’t live in an apartment, I would still own a fire extinguisher, replace my smoke alarm batteries, and install a decent carbon monoxide detector. Why? Well, because I want my family to be safe. Because I want to take proactive steps to prevent unneccessary death due to fire, smoke, and carbon monoxide poisoning. It’s logical, right

So why don’t people think the same way about the government and their freedom as they do about protecting their family?

Okay, so I am sure some people would insert various conspiracy theories about the FDA, aliens, or whatever else here. Instead of thinking about things in terms of trusting or not trusting the government, think about it in terms of protecting yourself. In other words, fighting for your liberty, and libertarian ideals, protects you.

It’s okay to not be 100% hardcore libertarian. (In my book, anyway!) I can accept that life is gray and individuals adopt ideology slowly. I know that many people will never be 100% libertarian. What I have trouble with is the idea that people are opposed to the idea of limiting governmental intrusion at all. People are afraid to question at all, as if merely thinking outside the box is akin to something treasonous.

I have been told by people I know that they are actually “perfectly happy” to believe what they have been taught. To accept what is told to them no matter the facts. To this I say hogwash!

1) If you don’t stand up for you…who will? What harm is there in fighting for liberty? For justice for others?

I know who won’t: the Government.

2) A lot of good, intelligent people believe that the government has your best interests at heart. It doesn’t. The government doesn’t have a great track record about protecting liberties or even giving back its power.

At the very least, advocating for yourself brings awareness by default. You cannot advocate for your rights if you don’t know which ones are being taken from you, often without your knowledge.

I would say that the first steps for those interested in libertarianism isn’t necessarily to jump deep into the political philosophy, although it is essential in the end. I think a better base is in history, in the whole story. It’s in getting your news from many outlets. It’s in learning how the system works and who your representatives are. And it’s in taking to heart one key principle: You are the safeguard of your own liberty. To refuse to protect it and fight for it is to effectively give it away.