Big Idea #2: What Do You Owe Society? 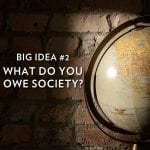 Ok… You might be thinking, “Government is force? Taxation is theft? This sounds a little far fetched.”

But isn’t history the struggle of humans to earn freedom from those that wish to control them? Mark Skousen once said, “The triumph of persuasion over force is the sign of a civilized society.”

This fun video shows an exchange between one that advocates self-government and a skeptic. You can also think about the questions below the video.

What happens to a person that doesn’t pay taxes? Does the IRS look the other way? Or do they enforce the mandatory payments? If you found out that the IRS wasn’t actually putting people in jail for failure to pay taxes, would that make you more or less likely to pay what the government says you owe? Taxation depends on an increasing amount of unpleasant consequences that end in violent force.

But don’t we all owe something to society? Isn’t there a social contract that says you have a responsibility to help pay for government? Isn’t it like going in to a restaurant, eating dinner, and then not paying for your meal!?

So who owns you? Who owns your house? You car? Your children? Are you property of a government? Or do you own yourself?

We also have to think of property, or the things you own. How is property acquired?:

Normally, if a peaceful person is threatened with violence by someone in order to take their property, we would call that theft.

In the end, governments cannot be responsible for your success, fixing your failures, or ensuring that the basics of life are met. Otherwise, you are the property of someone else. But how can we be sure self-government works? The evidence is in the flow of human migration.

Chris Spangle is the host of the Chris Spangle Show, History of Modern Politics, and Liberty Explained, podcasts on the We Are Libertarians Podcast Network. He is also the co-host of the Patdown podcast, a comedy podcast with comedians Ms. Pat and Deon Curry. Chris Spangle has been podcasting since 2007, and now teaches podcasting at PodcastingAndPlatforms.com. He also hosts the public affairs radio show “We Thought You Might Like To Know...” on Indiana radio stations which focuses on nonprofits.