This year’s event was my fourth consecutive national convention, and it was my favorite to date.

Often, the nature of politics and the business at hand makes for a solemn and serious occasion, but this year, things were different. 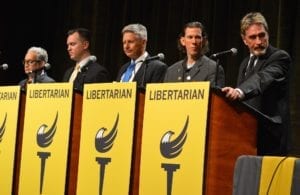 This year, the excitement was on par with a major sporting event, graduation, or a concert. That excitement was due to the contested Presidential nomination with some of the best candidates the party has ever fielded, accompanying the “feeling” that this is a pivotal election for the party. The stars are aligned for historic electoral outcomes as the animosity toward the establishment parties.

On top of the enthusiasm for unprecedented electoral success, several candidates for President brought supporters brought energy that caught on quickly.

At the pre-convention unofficial Presidential and Vice-Presidential debates on Thursday, I served on the panel for the standing room only events, asking the candidates to make their case to the delegates. With a welcome reception sandwiched between sessions of the debate, the energy carried over to infect the rest of the attendees.

By Friday morning’s opening gavel, the “buzz” made its way throughout the convention center, infecting everyone I came across. This was my fourth consecutive convention, and I’ve not seen anything like what I experienced. Often, my experience with Party-specific events is somewhat “flat,” while libertarian movement events are dynamic, engaging, and energetic. This definitely fell in line with the latter.

Even the vendors filled the hall with booths, where just two years ago, a couple booths stood outside the convention hall in a vast, lonely space. This year, we could have used two volunteers at the Advocates booth to help with the volume of excited libertarians who wanted to learn about how we support the libertarian movement, from the World’s Smallest Political Quiz to communication training and political persuasion, changing hearts and minds to libertarian ideas.

The energy and excitement never died, as the delegates and other attendees continued engaging with one another up to and beyond the Presidential nomination. The passion displayed by supporters showed their love of libertarianism, as they courted undecided delegates and conversed with others. The source could be the injection of youthful, engaged, and committed delegates and attendees. No matter, it didn’t stay there. It was EVERYWHERE.

Saturday’s Presidential debate and the nomination the following day felt like the Indy 500, the Super Bowl, and the World Series wrapped into one event. In fact, I think I’m still recovering from the energy spent today (Wednesday). Things certainly peaked as the Johnson/Weld ticket was nominated.

There’s so much more to share, and I wish I could have bottled my experience to share with others.