Lenz: Rothbard, Rand Paul, and Kokesh Walk Into A Bar…

Rand bursts out, “The Presidency in 2016 and a lockstep Congress! I know how to turn this country around!”

Kokesh replies, “You FOOL! Armed revolution is the path to restoring liberty. YOU’RE THE PROBLEM you moronic statist. Why don’t you go pass a law? That seems to work so well.”

Then Rothbard chimes in, “Now Adam, it’s militant kooks like you that keep Libertarians from becoming mainstream. I see no other conceivable strategy for the achievement of liberty than political action. Religious or philosophical conversion of each man and woman is simply not going to work.”

Rothbard interrupting, “I’m sorry Rand, but you’ll have to remove your head from Pat Robertson’s rectum if you want us to hear you. Now, tell me more about your bill authorizing domestic drone use on liquor store thieves…

Kokesh erupts in a manic uncontrollable laughter (the way only anarchists can), eyeballs bulging, forehead vein about to burst, when finally he says,  “Damn Murray, for being an ivory tower egghead that was pretty good. We might just turn you into a useful soldier in the march for liberty after all.”

Rothbard: “Oh really? You think I’d be a useful? Tell me, what would my role be? Wait, I know… I’d love a role in the Department of Fluoridation and Neuroscience. Better yet, do you have any security guard positions available at Building 7? I don’t mind if I have to ‘pull’ the graveyard shift.”

Completely exhausted from all the fighting, they sit at the bar silently staring into their drinks when finally the bartender asks,

“Are you guys together or separate?”

That’s the million dollar question for the liberty movement right now. Are we together or separate?

Can the liberty movement gain in popularity given the current amount of infighting? Doesn’t it make more sense if we collectively (the irony isn’t lost on me) support each other’s motivations? Statism is the enemy. Not fellow liberty pursuers. If we’re going to beat back statism we have to wage a war on multiple fronts. That’s how enemies are defeated.

Let the Agorists pursue strategies of counter-economics, let Adam Kokesh hold armed marches on state capitols, and let the intellectual wing fight the war of ideas. Each group represents a front in the war on statism. Find your avenue for contribution and get engaged, but just because you’re pursing one avenue doesn’t mean another isn’t helpful. We’re fighting for the same thing.

Should Austin Peterson have mocked Kokesh with a water gun rally? Quite frankly, no. It was a pansy ass way of saying he disagreed with Kokesh’s tactics.

In reality, the two of them have similar political intentions, but Peterson believes he can’t afford to be associated with the anarchist strain of the libertarian movement. His invitations to Washington cocktail parties would end if he offered vocal support to Kokesh’s marches. However, he could have offered silent support in another way.  Instead he chose to become the Andrew Clark to Kokesh’s John Bender. 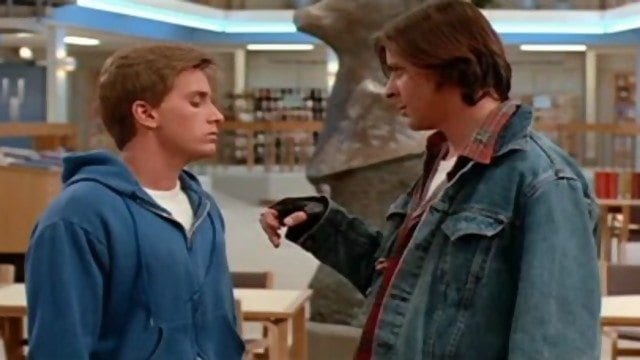 Real contributions to liberty are hard. Waiting for societal collapse, so you can finally live in a Utopian paradise is easy. It’s hard supporting an imperfect candidate and pursuing political change given the constraints of the system. Rand Paul could very easily have followed in his dad’s footsteps and become a beloved yet unelectable martyr. He took the more difficult path. He’s operating within the constraints of political reality. On a nightly basis he walks a rhetoric tightrope by appearing on cable news shows, and why? Just so he can try and defend our rights as enshrined in the Constitution.

So when you see Rand Paul pandering to GOP voters on Fox News or The 700 Club, don’t be so quick to pull up ZipMeme. Don’t mistake trivial internet arguments debating Mutualist vs. AnCap supremacy as progress. Don’t mock Adam Kokesh when he calls for an armed march on state capitols. He’s sticking his neck out. Can you disagree with his tactics? Of course. You wouldn’t be a good libertarian if you didn’t, but you should still support what he’s trying to accomplish. He is the man in the arena. Let’s all agree to stop being critics.