Editor’s Note: Last night Ron Paul spoke to a crowded venue at Indiana’s DePauw University. Get the speech audio here and the press conference audio here. We Are Libertarians writer/contributor Greg Lenz was in attendance. When the event concluded, he wrote this: 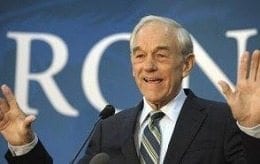 Right now Ron Paul is embroiled in the fight. An MSNBC watcher would believe Dr. Paul is a racist, sexist, bigot, and homophobe. Last night the crowd at Depauw University were not MSNBC watchers.

Last night was a victory lap; one about refueling and reflection. Surrounded by over 1000 attendees the good doctor basked in the adoration of the very liberty loving people he has fought for all these years. The crowd was overwhelmingly twenty-five and under, but with more baby boomers than your typical liberty event (It’s happening).

For years the beltway intelligentsia have treated Dr. Paul as a novelty item – simply a man grasping for relevance in a crowded GOP. Not since the Vienna Academy of Fine Arts denied an aspiring artist named Adolf has such a man and his message been so underestimated. Dr. Paul was scheduled to speak at 7:30 pm, but that didn’t stop nearly 500 or so people from lining up nearly an hour beforehand. The line stretched all the way out the main entrance into the lawn and everyone could feel the energy pulsating throughout the building. In a way I found this sort of anticipation odd. Usually one does not go to a Ron Paul speech for inspiration.

Dr. Paul’s appeal is his approachable and folksy demeanor that endears you towards him before he has even said a word. Nor does one go to a Ron Paul speech for original content. You would be hard pressed to find a more consistent message than that of Dr. Paul. He is extremely well versed, yet explains libertarian values as little nuggets of common sense. No one sells liberty in a more efficient way. However, he’s not known for lofty and rousing rhetoric. In my opinion, one goes to hear Ron Paul to pay homage to the man and his legacy. The Japanese have a tradition called Seizenso, a living funeral. People come to celebrate and relive the great memories of their past. It gives people a chance to tell someone how they affected their life before the opportunity is missed. That’s what this felt like.

Ron’s not a politician anymore. He still contributes through media appearances and the Ron Paul Channel, but politically the torch of liberty is passed onto the likes of Rand Paul, Thomas Massie, Justin Amash, and Ted Cruz. Never forget gentleman, you stand on the shoulders of liberty’s giant. In his new place, outside the political arena, his role has changed to that of a buttress and not a pillar. Only in the sense that he now supports liberty from outside. Dr. Paul’s speech was on point as expected. He touched on non-intervention as a general rule, the non-aggression principle, tolerance in society, the patriotism of Edward Snowden and Private Manning, ending the Federal Reserve, bailouts, and Libertarian populism. All the pertinent topics of the times.

I’m not sure why, but during his speech the movie The Shawshank Redemption came to mind. I began to see similarities between Dr. Paul and Andy Dufresne. Two men impossibly committed to a seemingly unreachable goal.  Both men trudging through each day with a distant vision serving as their only fuel. They could taste that first breath of freedom. Dufresne’s tool of choice was a rock hammer; simple, small, and non threatening. It took him 20 years to tunnel through the prison walls with that hammer, to say nothing of the 500 yard excrement filled sewer crawl on his journey to freedom. Dr. Paul’s tool is his message.

Its been 24 years of preaching the same message over and over. All the while, Dr. Paul had to live through two GOP reinventions, only to have his positions ignored. Andy Dufresne could see the results of his work on a daily basis, but he still had to crawl through excrement. However, in all reality isn’t the difference between crawling through sh*t and spending 24 years in Congress a matter of semantics? Each man used a simple tool, but when those tools are applied over and over for a period of 20 years, their impact is monumental. What is the biggest difference between Ron Paul and Andy Dufresne? Ron Paul’s prison is inescapable…yet undaunted he presses on.

When ending his speech last night Dr. Paul quoted Victor Hugo,  “Nothing is as powerful as an idea whose time has come.”

He believes with every ounce of his being that the American people are coming around to his views. All signs seem to be in support of him; constantly hearing the word libertarian on the news, real political discourse about the surveillance state, and polling data in favor of non-interventionist foreign policy. All these signs serve as sunlight at the end of the tunnel. They give Dr. Paul hope and prove to him that his life’s work has made an impact. He is a product of the greatest generation. In my opinion, belonging to that generation has been the single biggest influence on his beliefs. His passion, tireless work ethic, and willingness to stand alone when he believes something is right, are all traits of a bygone generation. These men and women survived the depression, won World War II, and built the most productive economy in the history of the world. Selflessness is something they know all about.

There is an ancient Greek proverb that says,  “A society grows great when old men plant trees whose shade they know they shall never sit in.” Dr. Paul, you have served as my introduction to libertarianism. You changed my mind and shaped my views in a way few have. Your contribution to the liberties of all Americans is immeasurable. On behalf of myself and those who have come after me, thank you for planting those liberty seeds so that we may enjoy their shade.