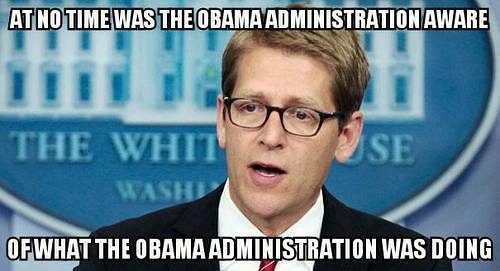 During a recent commencement speech at Ohio State University President Obama lashed out at political opponents.

“Unfortunately, you’ve grown up hearing voices that incessantly warn of government as nothing more than some separate, sinister entity that’s at the root of all our problems.” President Obama continued, “Some of these same voices also do their best to gum up the works. They’ll warn that tyranny is always lurking just around the corner. You should reject these voices.”

One of those voices was Thomas Jefferson who once said, “Most bad government has grown out of too much government.”  Today we are witnessing just how bad the government can get, and how right our founding fathers were about limiting the size of government.

Over one-third of the house committees are involved in hearings related to missteps and wrongdoings committed by the Obama White House. Improper targeting by the IRS, the Benghazi terror attacks, seizing the phone records of Associated Press reporters, and an investigation into political fundraising for Obamacare will keep our elected officials busy for a month in oversight and criminal investigations.

President Obama tried to distance himself from some of these incidents by claiming that he learned about them from the same media reports that the American people watched as these stories broke. White House Press Secretary Jay Carney has spent the better part of a week re-enforcing the “know nothing” status of the Oval Office: “We are not involved in decisions made in connection with criminal investigations, as those matters are handled independently by the Justice Department.”

Tell that to the Associated Press. The Justice Department secretly subpoenaed two months of phone records of AP employees in what some have called a “massive and unprecedented intrusion” into a news organization. This aggressive trend of intimidating the press and informants from bringing government wrongdoing to light is troubling. The Obama administration has prosecuted more whistleblowers than all past presidents combined.

Senator Rand Paul added: “The Fourth Amendment is not just a protection against unreasonable searches and seizures; it is a fundamental protection for the First Amendment and all other Constitutional rights. It sets a high bar, a warrant, for the government to take actions that could chill exercise of any of those rights. We must guard it with all the vigor that we guard other constitutional protections.”

In other news that President Obama knew nothing about, the Justice Department is investigating the IRS for improperly targeting conservative groups seeking a tax exempt status. An independent report from the Inspector General’s office confirmed these findings and acting director Steven Miller was fired. However, Miller’s departure has not toned down the rhetoric.

Senate Minority Leader Mitch McConnell said, “These allegations are serious — that there was an effort to bring the power of the federal government to bear on those the administration disagreed with, in the middle of a heated national election. We are determined to get answers.” Former White House senior adviser David Axelrod, quickly came to the president’s defense:  “Part of being president is there’s so much underneath you that you can’t know because the government is so vast.”

This excuse strikes at the heart of the issue. Thomas Jefferson also said, “The natural progress of things is for liberty to yield and government to gain ground.” Conservative groups and the Associated Press saw their liberty trampled by an ever-growing government, as did the families of the four Americans who were left to die in Benghazi. But President Obama isn’t alone in dealing with scandals. They are historically a bi-partisan issue.

President Nixon had a rough night at the Watergate hotel, President Reagan forgot about an arms embargo with Iran, President Clinton “did not have sexual relations with that woman,” and President George W. Bush thought there were weapons of mass destruction hiding under oil wells in Iraq.

Over the coming months, numerous hearings and investigations will shed more light on recent events and tell us why government has gotten so bad. We may even see a few of these past transgressions used to give insights in to the current White House woes. There will be grandstanding and ceremonial bills and rhetoric laden press conferences. What you will not find are laws that reduce the size of government which, as Thomas Jefferson would tell us, is exactly what is needed.