That means treating broadband services like utilities, the president said, so that Internet service providers would be unable “to restrict the best access or to pick winners and losers in the online marketplace for services and ideas.”

In January 2014, the United States Court of Appeals for the DC circuit sided with Verizon and overturned the FCC’s Open Internet rules. But it was not a total loss for the FCC. The court upheld that the FCC has authority to regulate Internet openness. The court just did not like the legal grounds the agency based its rules on. Shocking I know, the government while ruling for the plaintiff, showed the government agency the proper way of claiming such authority.

However, one must admit that on its face, it seems like a reasonable request.

One that puts the American consumer before the corporations that provide the infrastructure of the web. One of my rules of thumb, in assessing regulation and legislation, is the reaction of the affected companies. ATT, Verizon, and Comcast all had their spokespeople release a response to the President’s announcement:

“Reclassification under Title II, which for the first time would apply 1930s-era utility regulation to the Internet, would be a radical reversal of course that would in and of itself threaten great harm to an open Internet, competition and innovation”-Verizon official statement

“Today’s announcement by the White House, if acted upon by the FCC, would be a mistake that will do tremendous harm to the Internet and to U.S. national interests”-Jim Cicconi, AT&T senior executive vice president for external and legislative affairs

“To attempt to impose a full-blown Title II regime now, when the classification of cable broadband has always been as an information service, would reverse nearly a decade of precedent, including findings by the Supreme Court that this classification was proper”-David Cohen, executive vice president at Comcast

As you can see, the reaction by the broadband providers was NOT a positive one, with Comcast going as far as outlining a potential legal strategy for a lawsuit against any such classification of broadband as a utility.

While part of me revels in their misery, due to the fact that these providers are already bastard children of public-private partnerships who, to paraphrase Ron Swanson, 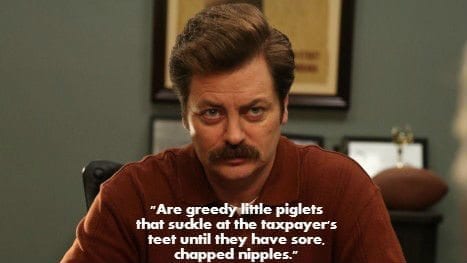 But, schadenfreude has no place in determining the virtue of Net Neutrality. The internet is simply too important to mankind to let emotion creep in.

So, what should be our criteria in assessing whether Net Neutrality is a good thing for the individual?

1) Will it lower the price of broadband for the individual?

2) Will it improve the quality of broadband for the individual?

3)  Will it increase the government’s role in our lives and what effect would that have on the internet?

Will it lower the price for the consumer?

Perhaps for some in rural areas, but not for 95% of consumers. Texas deregulated their energy industry in 2000 and the effect on price was drastic for those in competitive markets:

“The regulated price per kilowatt hour in CenterPoint’s service area was 10.4 cents then. Factoring in inflation, the equivalent today would be 13.6 cents. Essentially, consumers today can buy electricity on a fixed-term contract for 44 percent less than the prices of 2001.” (Source)

Now think about your personal financial situation. When was the last time your cable bill, without introductory or teaser offers, went down? Your cellphone bill, excluding setting up a family and friends plan? How about groceries? Taxes?

The point is, competition drives down price, not regulators. If anything, the government should be deregulating the broadband industry and getting out of its way entirely, of course that assumes the government really wants to help the consumer…

Will it improve the quality of broadband for the consumer?

However, the improvements in the electric utility industry are not keeping pace with those in a variety of other service industries.

You cannot regulate a company into caring about its customers, nor can you regulate that said company invest in innovation so that they can improve their product. Only competition, free from government intervention, can increase the quality of products while simultaneously driving down the cost. So why on earth would someone limit the number of providers to one or only a select few?

Will it increase the government’s role in our lives and what effect would that have on the internet?

So far we have learned that turning broadband into a utility will not only raise the cost of broadband it will also lower the quality of service, if history is any indicator. But would it increase government’s role in our lives and how would it affect the internet?

You would have had to have lived in an area controlled by the Islamic State over the last year and a half, to be unaware of the government’s absolute control over the internet. The US Federal Government watches every corner (Google: Snowden, Dread Pirate Roberts, Silk Road 1 and 2.0).

Now, the defeated among us may be saying, “How much more control could they possibly have? Why even put up a fight?” But that misses the point entirely.

Net neutrality may not increase the government’s role in our lives, because how exactly does one increase infinity?

But what it would do, is grant license to the broadband providers to stop innovating and investing in infrastructure, and would shift their executive’s focus to figuring out ways to squeeze as much profit as possible from their existing infrastructure. When would that moment be?

The second their accountants discovered that the cost of expanding their infrastructure would be greater than the potential profit from serving new customers.

In addition, what would happen if a disruptive technology were to emerge that threatens their profits and thus the livelihood of these government sponsored monopolies? Can you already picture politicians hitting the road to campaign about protecting jobs while lining the pockets of their SuperPAC with funds from the broadband providers?

Would you really put it past the government to ban said technology in the name of the American worker?

So to answer our question, would Net Neutrality increase the government’s role in our lives and what would it do to the internet? Net Neutrality is the equivalent of putting a restrictor plate on a drag racer. It would forever hamper the technological development of the internet.

It’s pretty clear, that unless you have given up all hope in the fight against government cronyism and are willing to accept download speeds as they exist today and no faster, Net Neutrality is an atrocious crime against the individual.

I know I am probably overly optimistic in believing that I will live to see the defeat of government cronyism, and the cynics are probably right to mock my belief in the transformative power of the internet. But the internet has been invaluable in assisting mankind with his liberation from the rule of tyrants. Where would we be if the United States had passed Net Neutrality in 1999?

Would the Arab Spring have happened?

Last, but not least, would Steve Jobs have had any reason to ever begin working on a combination wireless MP3 player and cellular phone? Would the $25 Billion annual market for mobile applications even exist?

So no. I do not accept or support Net Neutrality. I stand resolute in preventing the government from shackling the internet and damning it into a modern dark age. Why?

Because I am a libertarian, which means I dislike the world as it exists today. Rather than behave rationally and adapt to the world, as Net Neutrality supporters are so wont to do, I stand in direct opposition to it and the status quo.

The unthinking supporters, at one point or another, have probably given the picture below a Facebook like or even shared it while they were on their iPhone at a Starbucks, where they ordered a latte via the Starbucks mobile app, because they were connected to the free high speed wireless network during their wait in line: 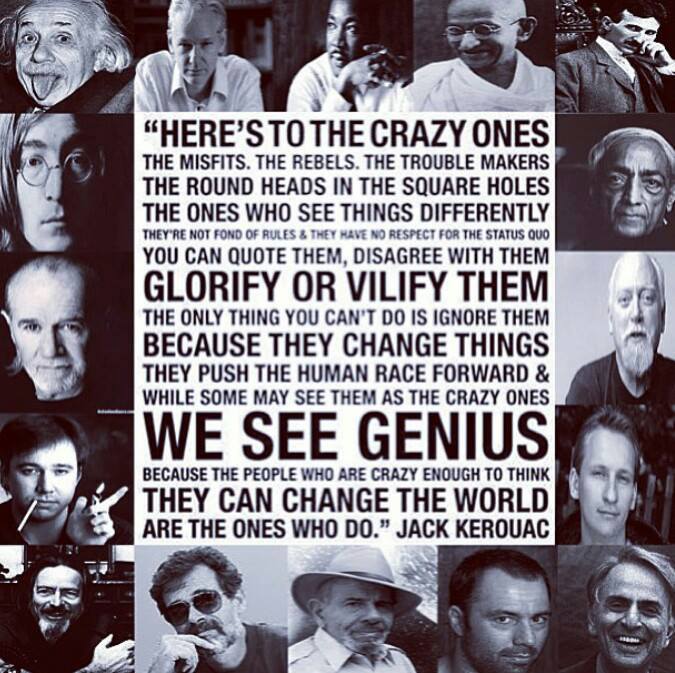 That’s too bad because if it were up to them, and Net Neutrality had been passed in 1999, their Starbucks experience would have been much different.

They would have been waiting in line playing Snake on their Nokia 3210’s, thinking about which songs they were going to remove from their MP3 player to create space for the new ones, and getting out their wallet to pay the barista with cash.

Luckily, the world is not reliant upon Net Neutrality supporters for progress.

It relies on us. We are the crazy ones. The misfits. The rebels. We are the trouble makers, the round heads in the square holes, the ones who see things differently. We are not fond of rules or the status quo.

You can mock us, you can belittle us, but you cannot ignore us. Because we change things. We push the human race forward, we stand in opposition to government control, and we are just crazy enough to think we can change the world.  Why?

Because unlike the Net Neutrality supporters who cling to their download speeds and demand internet streaming equality, We Are Libertarians. We prefer the unleashed, unrestrained internet because without it, you would not be reading this…