With Rand Paul’s Filibuster, Liberty Has Come Into Its Own

“Liberty’s too precious a thing to be buried in books, Miss Saunders. Men should hold it up in front of them every single day of their lives and say: I’m free to think and to speak.”

Something special happened on Wednesday. Something that cuts through our transient worries and trivial day-to-day comings and goings; it sneaks behind our cynical guards and goes straight for our hearts. Through the fog of corruption, callowness, and pugnacity which normally stumbles out of Capitol Hill like an arrogant child grasping for vanity, it radiates as a beacon of integrity, dedication, and, above all, principle. Where the brightness of its intensity only serves to lift our spirits and make us remember that feeling of what it meant to be great. A feeling that we had forgotten over years of wear and disappointment.

Its the kind of thing that, when we see it, we get lost in its spectacle and all of our other cares slip away. For one perfect, transitory moment, everything is exactly where it ought to be. Everything we believe, everything we strive to achieve is on full display for every American to witness. In this rare, collective moment, they finally see what we so desperately desire to build; for one brief moment, they feel as we feel.

For me, it was one of the most memorable moments I’ve ever had from the first day I got involved in this movement. It was the moment I had been waiting for; the kind of moment that I imagined the statesmen of old, the paragons of American virtue from our past doing as they built this country and stood for what they believed. It shook me straight to my core. Its intensity was surpassed only by its unequivocal demonstration of the level of conviction and vigilance we all must possess should we desire to succeed in our endeavors to win back our freedoms and save our country.

For me, I finally had a modern day moment, something in the present I could reference to as to why I am proud that I am an American.

Of course, on Wednesday, Rand Paul stood for 12 hours, 57 minutes, and 11 seconds in front of all of America asking one basic question, “Can the President of the United States kill an American citizen on American soil if he is not currently engaged in imminent hostilities against the United States?”

This question, however, goes far deeper than simply a question of policy. It asks whether or not we have lost our way. Whether or not we have become so entangled in fear and anxiety that we have forgotten the true virtues of what so many have fought so hard to provide and given their last full measure of human devotion to ensure.

In short, and in my view at least, he asked simply do we believe in liberty anymore.

I stood with Senator Paul the entire day. I listened to his every word. I listened for every single hour. If he could do me the service of standing there for it, I thought, then I could do him the service of listening. I listened as he said, “You either believe in the Constitution or you don’t” and I felt vindicated. I listened as he said, “I will not sit quietly and let the President shred the Constitution” and I cheered. I listened as he quoted Madison and Spooner, as he pulled the various strands of the philosophy of liberty together on a national stage for everyone in America to hear and my eyes misted when he stood on the floor of the Senate and exclaimed, “America is not a democracy; it is a Republic.”

For 13 hours, he escaped the restrictions of modern day thought builders and opinion shapers; he broke through their machine and reminded us all that America is more than just a place, it is an idea. The idea that every man is free; that no man is subject to the whims of arbitrary power; that our country is more than our status in the world, but is built upon the foundations of life, liberty, and the pursuit of happiness. These are not merely mottos, but are one and the same with our existence as Americans.

It began with him alone at the floor. He spoke for hours before other Senators, recognizing the importance of the moment, helped him in his task. This day, I thought, I will forget any of my preconceived opinions of them and just stand beside them as they stood beside Rand. Senators Cruz and Lee undoubtedly stood beside him because they shared his convictions and even though some of the other Senators, who will remain nameless, undoubtedly joined for self-aggrandizement, I decided to forget about their ineptitude in the face of Rand’s enormous statement and I just continued to listen.

When Senator Cruz was yielded to for a question and he read the last words of William Travis at the Alamo, relevant because March 6th was the anniversary of its siege, I lost my breath. “Victory or death,” I heard. I could not turn away.

Then came a moment for which I lost it all. Cruz stepped up to the podium and read the words of thousands who were watching at home. Again and again I heard “proud” and “honored” and, of course “stand with Rand.” I literally teared up. It affirmed that the event was more than partisan grandstanding. It was more than vanity or fundraising. I was not alone, the country was watching and they saw what I saw, a man was standing up for the virtues of our Republic and they were just as grateful as I.

Of course, there was nothing more comparable to the moment than the 1939 film “Mr. Smith Goes to Washington.” I saw in my mind that iconic scene where Jimmy Stewart stood on the floor of the Senate – hoarse and weary, yet still heroically vigilant – and said:

“Just get up off the ground, that’s all I ask. Get up there with that lady that’s up on top of this Capitol dome, that lady that stands for liberty. Take a look at this country through her eyes if you really want to see something. And you won’t just see scenery; you’ll see the whole parade of what Man’s carved out for himself, after centuries of fighting. Fighting for something better than just jungle law, fighting so’s he can stand on his own two feet, free and decent, like he was created, no matter what his race, color, or creed. That’s what you’d see. There’s no place out there for graft, or greed, or lies, or compromise with human liberties. And it’s not too late, because this country is bigger than the Taylors, or you, or me, or anything else. Great principles don’t get lost once they come to light. They’re right here; you just have to see them again!” 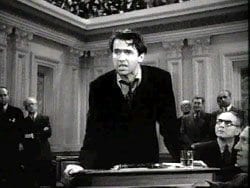 I read later that Senator Mark Kirk of Illinois, who recently suffered a stroke, limped, literally limped, down to Rand’s desk and placed upon it a thermos and an apple just as Jimmy Stewart in the film.

As the 1:00 am hour approached, Rand signaled that he was about to end his filibuster. He reiterated what he had been saying for hours, ending with, “I thank you for your forbearance and I yield the floor.”

I stood and applauded. In my room, with no one around, simply watching on TV and I just had to stand and applaud. The gallery above Rand burst into applause. The ending was perfect. It was nothing short of perfect.

Wednesday will go down in my memory as the day that what I have known to be the level of vigilance I must emulate was demonstrated in full force and it struck me at my core. One man stood in the den of vipers and thieves, he stared down the leviathan and he exclaimed for the entire world that, in America, you are and ought to be free. In America, your rights not only exist independent of the government, but rule it.

Rand showed the utmost integrity and honor in his vigilance in fighting for our liberties. It has been 800 years since the Magna Carta and we still have to debate the protections it espoused. It takes one man with courage, stamina, and honest convictions to breach the hearts of thousands and remind them of what is truly important. Our founders did not give us a country for people like Obama, McCain, and Graham to fear monger and shape policy around messaging themselves, but for men like Rand; statesmen with principles and convictions who believe in something bigger than themselves.

Everything changed on Wednesday. This was the moment, this was the day that the liberty movement came into its own. Its ascended above us; it is more than us now. He moved it into the front lines and now this fight is finally more than just ours, it is America’s.

In the final hour, after he had finished and the applause subsided I sat down and, finally, I could say, with absolute certainty, “Rand Paul has earned my respect.”