Lenz: Understanding Trump and His Lessons 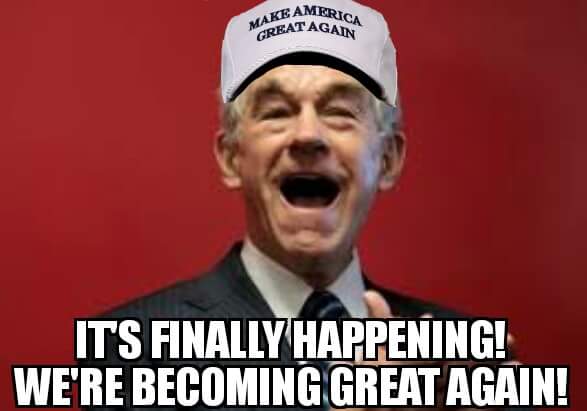 In observing the course of human events, one must acknowledge the role emotion plays in shaping mankind’s endless flirtation with freedom.

There is perhaps nothing more irritating to the libertarian observer, than our world’s continual objection of logic in response to crisis. In times of duress, we repeatedly prove willing to accept solutions fueled by the most primal of emotions.

What does it say about our species that in these times, the masses will gladly cede privacy, liberty, and control, over to the first messenger offering promises of protection and a false reprieve from the chaos?

The cynics among us may believe mankind’s flirtation with freedom is just that, an endless game of carrot and stick.

To these folks, libertarianism is more of an intellectual exercise than worldly destination. Truth be told, one can hardly be blame them for reaching such a conclusion after living in a post-September 11th world.

However, history was not written by cynical bystanders offering condemnations outside the arena, and neither shall our future be.

Donald Trump’s rise to the pinnacle of American politics, just like all unexpected political tidal shifts, is the result of two elements:

Personally, I remain perplexed by the libertarian disgust at Trump’s rise.

Admittedly, his reliance on nationalistic platitudes and appeals to the most animalistic of voter instincts, is antithetical to our libertarian minds and beliefs. However, his rapid ascent offers many lessons and much hope. His nomination alone serves as validation that status quos change.

One of the harsh realities Senator Rand Paul’s Presidential campaign faced in building a voting block, was discovering the overwhelming majority of his father’s Republican 2012 supporters, decifed to support Trump in the Iowa Caucus. Libertarians surely found such a shift by Ron’s supporters to be both hypocritical and confusing.

The confusion stems from incorrectly identifying the basis of their support. It was mistaken for a logical adoption of liberty-minded principles, rather than a shared and brewing anger. These folks were incensed and clamoring for a political outsider with promises of upsetting the status quo.

Is Trump’s success a good sign for libertarianism? Maybe, maybe not. That remains to be seen.

However, failing to learn from him, out of a personal distaste for his style or logically inconsistent policies, is a true loss for libertarianism.

Make no mistake, the adoption of libertarianism as a political philosophy is rising, as are the number of individuals discovering they hold libertarian beliefs for the first time.

However, our future will not be written as a result of the logical and collective adoption of libertarianism. We are not on the precipice of some libertarian version of a Marxist class consciousness resulting in a proletariat revolution. Utopia is not of this world. History tells us so, and it reminds us that logic, in a battle with emotion, offers little hope.

Ask yourself, how logical is it for the major parties to nominate two of the most unpopular individuals in America while trying to win a popularity contest?

Sure, votes can and will be won mocking Trump and Hillary, while presenting Gary Johnson as the adult in the room, but it won’t win us this election. However, we can win a Presidential election in our lifetime.

Our future electoral successes will not come as a result of mocking Trump-like figures and their angry mobs.

It will be done by successfully making the case that Libertarians are the true outsiders ready to upset the status quo. We must learn to harness the emotions of angry mobs.

How can Libertarians become emotional leaders capable of connecting with fervent pockets of discontent voters? How do we capture their support and turn it into electoral success while maintaining our adherence to libertarianism?

Libertarians have to quit condemning nationalist themes and political rhetoric theyy find to be lacking in substance. Libertarians need to realize that these things are tools, not evils.

How can we use them while still championing libertarianism?

Below is my semi-satirical attempt at Libertarian candidate messaging (Trump style). It is intended to entertain, while also serving as a framework for Libertarians to use in breaking outside our tired and restrictive messaging toolbox.

If we are going to win, we need to win the voters hearts. Lucky for us, Trump has proven attention is easily garnered with laughter. So in that spirit, I encourage all of you to try your hand at this.

In time, we too will have the attention of the masses. When we do, we will turn their ears with laughter, but unlike Trump, we will win their hearts with principle…

“Whose excited to build the wall?! It is going to be a great wall, that I can tell you. But rather than build one between the US and Mexico, how about we build a wall around Washington D.C. and the slimey politicians?!

We’ll build it so high, you’ll never have to worry about the crooked politicians taking a bigger bite out of your paycheck!

No more worrying about an invasion by some creepo Congressmen late at night, stumbling into your bedroom and telling you homosexuality is an abomination! Isn’t that great?

Instead of immigrants, if we’re going to send somebody back, let’s send our troops back home! Let’s stop spending tax dollars on endless war!

Anyone else thinks it’s dumb to send our soldiers into the Middle East so that ISIS has something to shoot at?

What a terrible and insanely stupid idea, right folks?

I mean really…how stupid do you have to be, to not realize you are paying for the privilege of fighting ISIS, meanwhile providing the targets to shoot at? Who would do that to our soldiers? Love our soldiers. It’s a raw deal.

Not on my watch. That I can tell you. Based on my opponent’s repeated votes for such a raw deal, clearly they aren’t the sharpest tool in the shed...

Let’s face it, Iraq was a failure. Washington D.C. with their laws and wars, which they keep sending the bill for back to our states and communities…It doesn’t take a rocket scientist to realize these laws were not passed by the best and brightest…am I right?

Listen, I’m going to build the wall. Libertarians build the best walls. Private walls built by the private sector. This wall will built by everyday Americans!

Not some corporate crony who made a campaign donation to get the contract. Who thinks he will go over budget? Buncha lyin thieves I tell you..and with our hard earned tax dollars no less. Am I right?!

Listen, when I’m President, we will build the wall. Why? So you and I can keep the real criminals out: CAREER DC POLITICIANS!

God. it is going to be so great…Just think, safe from the intrusion of dumb laws and taxes created by the same Washington politicians invading our states and homes!

I will keep them from taking a bite out of your paycheck! We will send THEM back! If we need them, we’ll know where they are…but I doubt we will.

Let’s get them out of our health care system! We don’t need them to offer accessible and affordable care! They can’t even build a website!

How many of you can’t even pick your own doctor because of Obamacare? It’s a rigged system folks, and the politicians are doing the RIGGING!

So that’s why I’m telling you this, on election day I promise, if you vote Libertarian, it will be great, so so great. I promise. Fewer taxes, fewer laws, no more war. Ok?

If you vote Libertarian, and help us win, I promise America will win again.

Our communities will win again.

Our families will win again.

You will win again. That I can promise you! How? I know Americans are winners, but Our leaders in Washington are losers.

You aren’t. I’m not. We’re winners. Hell, it wasn’t until we put them in office that we started losing! Why?

Because they are CORRUPT DC INSIDERS! They don’t care about you, they just want to be re-elected! That’s why!

Listen folks, we all know that America won the most, when it was fighting a tyrannical government in 1776!

NOT voting to support ONE!

Vote for me. Vote Libertarian.

Together we will start winning again.

We will build the wall, and when it is built, the days of corrupt career politicians taking your money, telling you how to live your life, and sending our family and friends to die without a reason in foreign wars, will finally be over.

After all, isn’t that what we all want? Peace and prosperity? YOU AND I BOTH KNOW, they are the ones preventing us from Making America Great Again!

THANK YOU ALL AND I LOVE YOU!”