Lenz: Tis Good Enough For Thee, But Not For Me 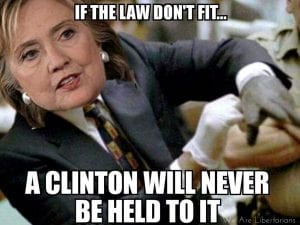 I’m sure to the apolitical and/or individuals who only follow politics during an election year, the question of whether or not Hillary improperly used a personal email account to communicate in her role as Secretary of State may seem sensationalized and trivial.

To quote the former Secretary herself, “What possible difference could it make?”

The truth is, she either acted in ignorance of the existing protocols, or she did it while fully aware of such laws, regulations, and protocols, but felt the inconvenience was too burdensome for someone of such prominence and importance.

So, former Secretary was at best, unqualified by proving to be incapable of carrying out even the most basic function of her role as the head of a government institution explicitly tasked with maintaining channels of communication with foreign nations,

OR she is an entitled liar who knowingly disregarded her obligations out of a sense of superiority and entitlement, and when caught, invoked the same entitlement by expertly covering up her acts while lying to federal investigators.

Given the fact her husband privately met with Loretta Lynch last week, head of the Department of Justice and the individual solely responsible with prosecuting her for any infractions, it begs the question…

Was Hillary Clinton intellectually incapable of carrying out even the most basic role of her job?

Or did she believe she was above her own institution’s rules and laws, and decided to expertly cover her tracks by deploying her husband, a man whose track record of lying under oath is as well documented as the genetic remnants he left on a certain intern’s blue dress, to improperly intervene on her behalf with a federal official?

I concede that the emails are trivial, but the erosion of trust in the institutions we are each equally bound and subject to in matters of applying and enforcing the laws of our nation, will only accelerate the appeal of authoritarian demagogues offering revenge and punishment at the expense of democracy, freedom, and rule of law.

Democrats, political class Republicans, the media, and academics cannot fathom the appeal of Donald Trump. Nor can they wholly account for the extreme polarization and brewing anger of the American political climate…

This would be a good place to start.

“Tis good enough for thee, but not for me.”