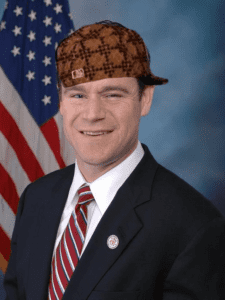 Regardless of your political affiliation as an Indiana voter, you should be outraged by the acts of the Indiana GOP in their effort to get Todd Young on the ballot for the Republican Senate primary.

If he, and those that work for/support him, are unable to meet the requirements necessary to gain ballot access, how could he possibly be fit to serve as a representative of Indiana?

Nothing says entitlement like someone who wants to write the nation’s laws, but chooses to ignore said laws when they obstruct their pursuit of legislative authority.

As if incompetence and entitlement weren’t disqualification enough, one has to wonder whom he would represent should he be elected…

The voters of Indiana or the “powers that be” who are, so desperately, trying to put one of their own in office?

As an individual, I have no issue with Todd Young. He seems like a pleasant guy.

However, as someone seeking the authority to represent all Hoosiers as a Senator, a position with responsibilities that include the authoring and passage of the very laws for which he’s shown so little regard, he is unfit to serve.

I don’t know about you, but I consider entitlement, an “above the law” mentality, and the power of outside influences on our representatives to be all that is wrong with our political system.

In that case, Todd Young is your guy.