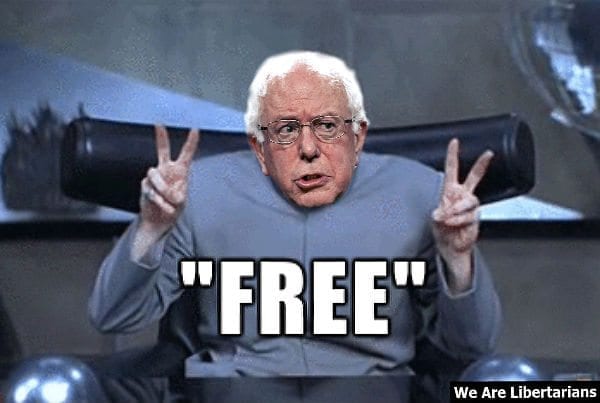 One of the most perplexing trends of the 2016 election cycle has been the amount of libertarian support I have witnessed for Vermont Senator, declared socialist, and candidate for the Democrat presidential nomination, Bernie Sanders.

Prior to Bernie’s primary challenge of Hillary Clinton, few Americans knew of the senior Senator from Vermont. For those who were aware of him, most considered him a relatively fringe actor in the political arena. For the most part, he was known as the less popular ‘”Ron Paul of the left”. My, oh my, how the times have changed.

Recently, I was at a wedding for a friend from high school, and being the political nerd among my group of friends, I was inevitably approached about the upcoming presidential election. As the reception went on into the evening, fueled with multiple libations, a close friend approached me about my thoughts on Bernie Sanders. The friend is an electrician by trade and not someone I remembered as getting caught up in the Obama hysteria back in 2008, as so many friends had. This individual was intensely passionate about Bernie Sanders and his platform. Quite frankly, I was a bit taken aback.

In the world of politics, I so rarely encounter genuine enthusiasm for old northeastern white males, so it took me a minute to get my thoughts together. To this point, I had only considered Bernie as a stand in at the debates, whose sole purpose is to keep Hillary from tacking too far to the center in preparation for the general election. Yet as our conversation continued, and onlookers began to participate by voicing their support for Bernie, it became clear I needed to start considering whether Bernie might have traction.

It is now two months after that wedding and Bernie has proven he is no “also ran” candidate, he’s a serious contender for the nomination. So much so, there are calls for the Democrats to draft Joe Biden because it seems Hillary Clinton is only capable of going down in the polls.

How on Earth did this happen? How did Bernie Sanders become a threat to the Clinton machine? Let’s take a look at some of his positions… 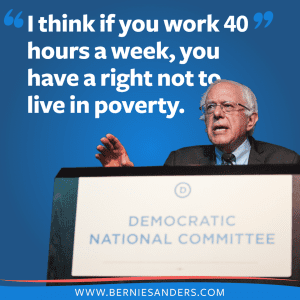 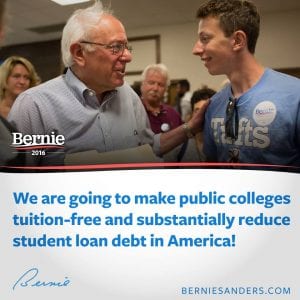 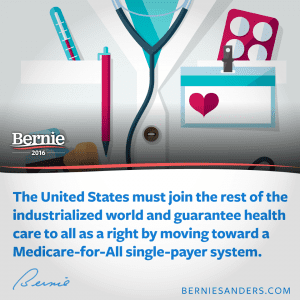 After all, even libertarians dream of a society where everyone works and supports themselves rather than being reliant upon the state to make ends meet. What is so bad about “making work pay”?

How about drastically reducing the cost of college and thereby unburdening graduates from a life of indentured servitude on the Sallie Mae plantation? Libertarians tend to be young and because of that, a large majority are either using student loans to attend college or are in the workforce doing their best to repay student loans. Wouldn’t it be great to be able to leave college debt free?

Lastly, you would be hard pressed to find an individual that disagrees with the sentiment of a guaranteed right to health care regardless of an individual’s ability to pay. In a perfect world, would we not design a system where someone in need of medical help would be free from the worry of being able to pay for the necessary care?

No wonder so many folks are “Feeling The Bern”.

Bernie hits all the right talking points, he pulls at the easily lured heart strings of his audience. On top of all the “free” items he promises, he also vows to crack down on corporate greed and government cronyism. He swears to do his best in trying to end the revolving door between government and private industry at the highest levels. Bernie comes across as the advocate each and every “Average Joe and Jane” has been waiting for their entire life.

However, what makes Bernie’s message so effective is not that he is promising free things in exchange for votes, any populist hack can do that to win an election. No, what makes Bernie so effective, is every word he says, every moment of attention he gives the struggling mother working three jobs at the campaign rally, is genuine. Bernie Sanders is the rare principled politician who means it when he says, “I represent you.”

Bernie is the little guy’s little guy. He is the underdog against the Clinton machine, Wall Street, and hundreds of millions in negative advertising. Yet, due to little more than persistence and the self-assuredness of someone who cares little of the political establishment’s opinion, he has won over millions of Americans. Somehow, a no name socialist from Vermont has shockingly won over the support of former Libertarian Party state chairmen.

Read that again, he has won over individuals who prior to supporting Bernie, wrestled with whether they were minarchists or anarchists, yet now they are throwing their weight behind a candidate who supports a GOVERNMENT GIVEN right to health care…it is stunning really.

The reason we libertarians, are champions of liberty, is not because we do not want our wealth to be taxed away or because we are desperate to be unburdened from the plight of our fellow man. No, the reason we champion liberty is because we too want to see a world where someone working 40 hours a week is able to provide for themselves and their family.

We too want to see a world where ambitious young minds can attend the university of their choice, obtain a world class education, and leave without the burden of indentured servitude to financiers.

We too want to see a world where individuals are guaranteed health care and are freed from the emotional anxiety of being able to afford it.

We, as libertarians, believe that the path to such a world does not run through government. It runs through a world where millions of self-governing individuals organically create systems of health care, finance, and employment that pay more than enough to cover the bills.

Some of you reading this may ask how exactly a group of disorganized individuals can organically arrive at such a Utopian endpoint without the forceful guiding hand of government? To you I ask the following:

No, but regardless, that is what happened.

In case you are still chewing on the questions above, the answer is always the same: GOVERNMENT.

The same “government” Bernie is insisting he can take control of and start producing better outcomes for the “Average Joe and Jane” at the expense of the evil greedy corporations whom are already in bed with the same government he wants to lead.

How is more government going to fix the problems created BY the very GOVERNMENT Bernie has such faith in?

The answer Bern, sorry to dampen the flames of your idealism, is…it cannot.

If there were any question as to whether government is capable of improving the lives of those who believe in it, one can find such an answer in the way it prevents people from feeding the homeless…