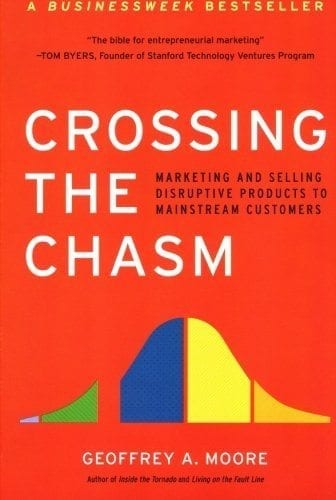 Crossing the Chasm, is a marketing book by Geoffrey A. Moore which focuses on the best way for a technology start up to enter a market and scale the growth curve in order to gain user adoption. In many ways, Moore’s blueprint for start up companies mirrors the path ahead for the growth of libertarianism, as well as the Libertarian Party.

Libertarianism, as a philosophy, is a relatively new entrant into the market of political philosophy. In comparison to the existing dominant players: conservatism, liberalism, and socialism/communism, libertarianism is the young start up looking to take away market share, much like an early 2000s Google versus Yahoo and the other major search engines of the time.

What is the “chasm” Mr. Moore writes about and how does he recommend one cross it?

Moore argues there is a chasm between the early adopters of a product (the technology enthusiasts and visionaries) and the early majority (the pragmatists).

Moore believes visionaries and pragmatists have very different expectations, and he attempts to explore those differences and suggest techniques to successfully cross the “chasm,” including choosing a target market, positioning the product, building a marketing strategy, choosing the most appropriate distribution channel.

According to Moore, the marketer (for our purposes libertarian candidates, public intellectuals, and each of us) should focus on one group of customers at a time, using each group as a base for marketing to the next group.

The most difficult step is making the transition between visionaries (early adopters) and pragmatists (early majority). This is the chasm that he refers to. If a successful firm can create a bandwagon effect in which enough momentum builds, then the product becomes a de facto standard, in our case: libertarianism as the dominant philosophical choice of American voters.

Below is a visual representation of libertarianism’s chasm and the road ahead for those that market it: 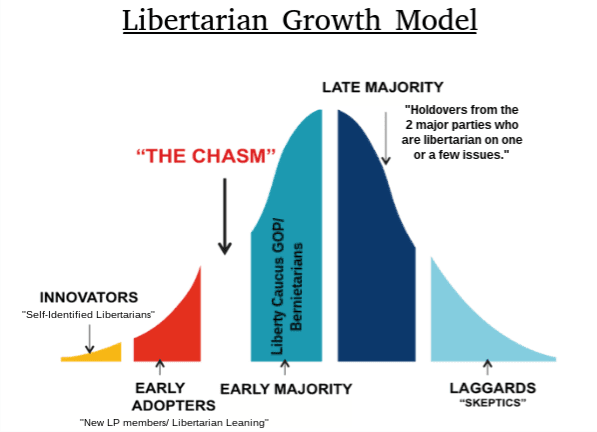 As things stand as of right now, it certainly appears libertarianism is looking directly into the chasm. 2016 has presented the Libertarian Party and its Presidential nominee, Governor Gary Johnson, with an unparalleled growth opportunity. In assessing the political landscape it is readily apparent that the majority of voters are less than excited about casting a vote for the nominees of the two dominant political marketplace shareholders: the Republican and Democratic parties.

In applying Geoffrey Moore’s framework to libertarianism and the Libertarian Party, we need to clearly define the landscape:

-Our target market is comprised of individuals disillusioned by the major party nominees and single or few issue voters who feel dismissed and unrepresented by a lack of attention to the issue or issues most important to them by the major parties. These individuals represent our “Early Majority” and our effectiveness in marketing to them will determine our success in crossing the chasm.

–Brand Ambassadors (candidates, media personalities, and party representatives): Gary Johnson, Bill Weld, Nick Gillespie, John Stossel, Andrew Napolitano, and Nicholas Sarwark represent our cause and its message each and every time they appear in the mass media. Their job is to represent the libertarian message in a way best suited for widespread appeal and mass consumption. Brand Ambassadors represent the first step in the conversion funnel. Their job is to attract and audience and spark a curiosity for more information.

-Thought Leaders (individuals who produce content with the intent to spread the message of libertarianism and bolster its credibility to those within the political mainstream): Dr. Tom Woods, Radley Balko, Walter Block, Dr. Mark Thornton, and anyone else with a platform designed to educate and inform those investigating what libertarians believe and what sort of policies a Libertarian official would seek to implement in office. Thought leaders represent the informational wing of the invasion force.

-Early Adopters/Brand Enthusiasts (individuals whose platform is limited to social and personal networks, yet are viewed by such as an informed authority with opinions to be taken seriously): All self-identified libertarians and Libertarian Party members. These individuals are tasked with creating the enthusiastic momentum creating contagion necessary for widespread adoption. Whether it be posting on social media or dinner party conversations, the key asset these individuals possess is influence over those immediately around them. This group is responsible for conversion because conversion requires social approval. Whether of not libertarianism and the Libertarian Party continues to grow after the 2016 election, entirely hinges upon this group’s success in presenting the party and philosophy in a manner that makes the “Early Majority” comfortable in making their decision to join our team.

However, what remains to be seen, is whether or not our Thought Leaders and Brand Enthusiasts will successfully perform their function in ushering the “Early Majority” across the chasm leading to widespread adoption over time. Libertarians have less than one hundred days remaining to seize this once in a lifetime opportunity. An opportunity, which may once and for all, send libertarianism and the Libertarian party across the chasm.

How will we know he have made the leap successfully?

The media will no longer view us as an interesting novelty worthy of townhalls on CNN with the hopes of portraying Libertarian candidates and their party as a reasonable, yet non-threatening alternative on election day.

No, libertarianism, the Libertarian Party, and its candidates will be held over the coals by a Democrat sympathetic mainstream media hell bent on thwarting the rise of a hot new start up with a sexy product: a new solution to a problem currently being poorly solved by the existing dominant players. As the Libertarian movement gains traction and crosses the chasm, our Brand Ambassadors will face hostility rather than curious inquiry. The press, as they always do, will seek to protect the status quo from competition.

In the early 2000s it was Google’s PageRank algorithm and dead simple search engine user interface which provided search results closer to the expectations of users. In the mid 2000s it was a rather plain, but never offline and quickly loading social network where users could easily find their college classmates on TheFacebook.com.

In 2016, it is a political philosophy and party where the voter is not required to accept the treatment of homosexuals as second class citizens in exchange for lower taxes, or accept harmful economic regulations and lower job growth in exchange for upholding a woman’s right to choose. Libertarianism and the Libertarian Party are the voter friendly alternative, whose arrival before the American voter is much anticipated.

Will we “Cross The Chasm”?

Only time will tell. But should we, it will be because each individual within the “Early Adopter” category has accepted their role and carried out the duties necessary for an successful invasion within American political marketplace.

Can libertarians leave behind the skeptical and pessimistic mindset from years of shouting from the bleachers? Are we ready to become the enthusiastic torchbearers with a contagious optimism and sense of inevitability necessary to leap across this chasm and into the political mainstream? I believe so and I cannot wait to see you all on the other side…