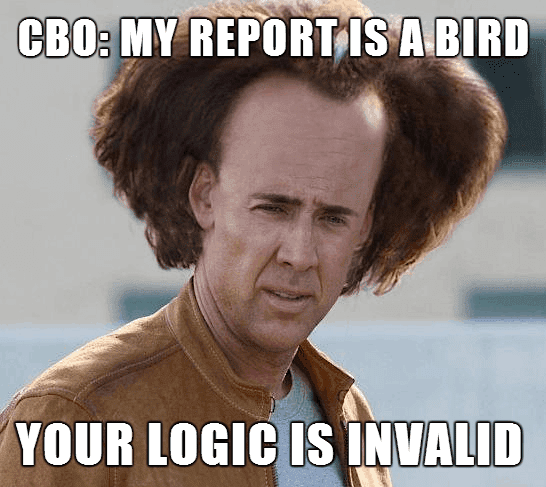 Yesterday the CBO released a report on the effects of the Affordable Care Act. It’s arguably the greatest fiction read since The Great Gatsby. Anyone looking for a quick escape into fantasy for several hours should check it out. If you’re more of a summary person, let me explain to you why it is completely wrong and therefore necessarily categorized as fiction.

Hundreds of thousands of Americans, if you believe the CBO millions, will either do one of three things:

3) Leave the labor force because their benefits aren’t needed to cover the family.

Will this increase aggregate demand for labor as some liberal economists have been projecting?

Absolutely not. Anyone who believes that should be stripped of their PHD.

1) Subsidies based off of income. Now an individual can work part time, keep his health insurance, and improve his lifestyle via the subsidy. How? Lets say my company health insurance plan costs ME $150 per month and I make $2500 per month.That $2500 per month is contingent upon working 40 hours per week. The $150 per month is probably not the full cost of my health insurance policy. In reality my company probably pays an additional $100 towards it. Now I can take a part time position making $2000 per month. Based upon the Kaiser Foundation’ subsidy calculator the maximum I would pay for a silver plan annually would be $775. That’s $64 per month. The true cost of that plan is $3200 per year, but my subsidy is for $2,425/year. Am I coming out dollar for dollar ahead? No. But now I’m not locked into a job I don’t like, I can reduce my health care expenses, have more free time to commit to things I enjoy doing all at the expense of the American taxpayer. Who clearly have plenty of money to throw at the problem (see the deficit).

2) Companies of under 50 people are exempt from the law. They are not subject to penalty that stems from not offering a health care plan. This is very problematic for job creation. See this research from the NBER: www.nber.org/papers/w16300.

It isn’t small businesses that create jobs, its young businesses. Young start ups that scale and expand rapidly are responsible for job creation in the United States. Now you have given young entrepreneurs an incentive to sell to a larger company rather than take on additional venture capital funding to build a billion dollar business or perhaps spawn an entire new industry capable of employing millions.

Imagine Facebook, if Zuckerberg had decided to sell to Yahoo for their $1 Billion offer, he would have created 47 jobs. Instead he raised huge rounds of venture capital and through December the company has over 6000 employees. However the ramifications are way bigger when you consider how many companies are based off of Facebook. Social gaming alone is a $16 Billion dollar industry.

All of that goes away if Zuckerberg sells. There’s no way Yahoo expands it to the size it is. Why would he sell for $1 Billion when he could build the $160 Billion giant it is today you might ask? Facebook didn’t have any revenue, its model was grow now and monetize later.

Throw in the additional health care fines and regulation issues he was facing when considering to go public and maybe he decides to take his $350 million of the $1 billion sale to Yahoo and take up yachting. Or maybe the additional personnel expenses he would have been facing weaken his negotiating position with venture capitalists. Instead of getting to keep 3 board seats and retain control, maybe no offers come in allowing him that luxury. All those jobs and tax revenue down the drain.

3) Liberal Pseudo Economists keep claiming that aggregate demand for labor will stay the same while aggregate supply will fall. That’s why they believe the ACA will cause upward pressure on wages. In a market economy when supply (the number worker hours available) drops, and demand (bosses with positions that need to be filled and work that needs to be done) stays the same, a new equilibrium is reached where price (wages) increase as a reaction to the new reduced amount of supply. Unfortunately this ignores our high unemployment.

There is an oversupply of people willing to earn a wage. Now that some individuals will choose to reduce their number of hours worked, the unemployed will fill that gap. Employers won’t react to the reduced supply of hours by immediately hiking wages. The first thing they will do is reduce their hiring requirements.

If that doesn’t work companies will start firing workers who reduce their hours available. Full time work will become mandatory for positions where it was not before. Or many positions may become part time only as many economists have suggested. There’s certainly an incentive for employers to offer part time only positions because the ACA exempted part time employees from the required coverage offering penalty.

Even more than that though, its pseudo economics to believe that you can decrease the amount of national income being earned in the aggregate and think more jobs will be created or incomes will increase. When workers choose lifestyle over wages, they will have less spending power.

Will the unemployed re-enter the workforce to fill those hours? Yes, but at lower hourly rates than experienced workers. So instead of one full time worker making $45,000 per year, now one 30 hour worker may make $30,000 and one part time may make $10,000. That’s $40,000 in spending power, $5,000 less than before. $5,000 less in US spending power times the number of individuals who shift to this type of work schedule and now we’re talking recession.

Government spending is going to become a problem very soon. Right now we are already suffering from “crowding out”. That is when the number of investment dollars in the global economy is invested in government debt instead of private debt. Why are US Treasury bills so popular when they offer a nearly negative return? An uncertain economic environment due to the ACA.

US and multinational companies are hesitant to undertake major renovation or expansion plans because of the uncertain economic environment they are facing due to the ACA. As companies adjust, they will begin investing and expanding based on forecasted demand for goods and services. When this happens the Treasury will no longer be able to offer such a paltry return on its bills. In order to attract buyers they will have to raise the interest rates of their bills.

This will be an enormous problem because they will begin competing for investment dollars with private companies seeking to finance debt for expansion. When the treasury has to get aggressive with its pricing to attract enough investment to continue financing operations crowding out will begin. Dollars that would have otherwise gone into private enterprise will take the easy returns associated with government backed debt. Job creation will suffer. This is only a small danger in comparison to the larger issue.

When more and more of our annual budget has to go to servicing the debt we’ve accumulated, thats when politics gets involved. Populist politicians will begin railing against honoring our debt obligations to score political points. If this happens it will make the threat of not raising the debt ceiling look like child’s play.

The other way to go about is to have the Federal Reserve continue buying Treasury bills as it is now with Quantitative Easing. They will keep accepting minimal returns, the government will have affordable debt payments, and who will notice? The poor. When the Federal Reserve buys Treasury bills it is lending dollars to the Treasury who is then putting those dollars back into the economy. When the number of dollars in an economy increases, inflation happens.

Rich people don’t get hurt by inflation. They put their investments into inflation hedged assets. But the poor and middle class, whose spending power comes from wages, will get crushed. They have fixed earning power and now you have decreased the buying power of those limited dollars through inflation.

The ACA is a bad law. Its intent is good, but its design is awful. It will not create jobs (except possibly on paper with more part time labor force participants at the expense of aggregate income), it does not lower the cost of health care (it merely socializes the true cost), and anyone who claims that it does has exempted himself or herself from the laws of logic.