I get so tired of being lectured to by uninformed cretins who espouse the benefits of gun control under the auspices of common sense and saving the children.

These individuals love nothing more than mocking the religious right for their “fictional” beliefs, they worship at the altar of science. So let’s look at the science, shall we?

Here are the facts. They are concrete. They are absolute, and if you are a gun control advocate, they are devastating.

2) Only 16% of felonies are committed with a legally purchased weapon. (Source)

3) 32% of felonies are committed with stolen weapons. (Source)

4) 52% of felonies are committed with weapons that are “borrowed” or bought from family or friends. (Source)

5) In the event you are robbed or mugged, your chance of injury is 11% less if the perpetrator has a firearm than a knife, and 16% less if unarmed. (Source)

6) National Institute of Justice surveys among prison inmates find that large percentages report that their fear that a victim  might be armed deterred them from  confrontation  crimes.  The felons most frightened ‘about confronting an armed victim were  those  from  states  with  the  greatest  relative  number of privately owned firearms.

Conversely, robbery is highest in states that most restrict gun ownership. (Source)

9) Contrary to what the intelligentsia suggest, mass shootings are not on the rise. Prominent criminologist James Alan Fox has found “no upward trend in mass killings” since the ’70s. (Source)

Take campus statistics as an example: “Overall in this country, there is an average of 10 to 20 murders across campuses in any given year,” Fox told CNN  (and roughly 99 percent of these reported homicides were not mass shootings).  “Compare that to over 1,000 suicides and about 1,500 deaths from binge drinking and drug overdoses.” Mass shootings on college campuses lag far, far behind many much more prevalent social and mental health problems.

The rare nature of these incidents also holds true for safety in K-12 schools, which garnered a significant amount of attention in the wake of the tragedies in Columbine and Sandy Hook.

10) In 1976, the Washington, D.C. City Council passed a law generally prohibiting residents from possessing handguns and requiring that all firearms in private homes be kept unloaded and rendered temporally inoperable via disassembly or installation of a trigger lock. The law became operative on Sept. 24, 1976.

Here’s a graph demonstrating the effects of the handgun ban and its overturn by the Supreme Court: 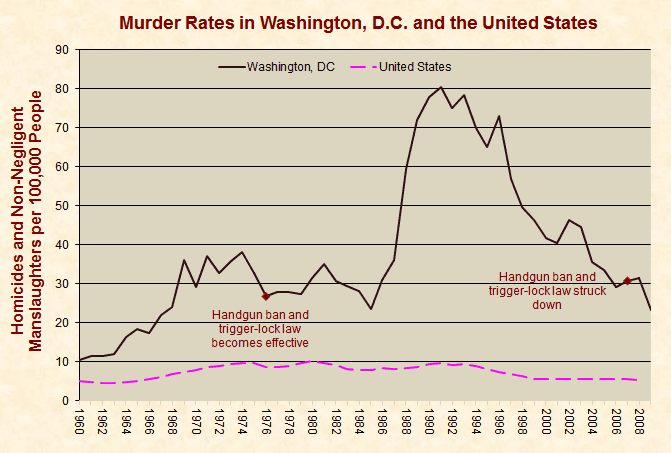 Gun control advocates are wrong. They don’t have a single shred of evidence to support their claims…

But hey, I understand and it’s not surprising when they get bitter. They cling to their pseudo-science, or unprotected homes, or anti-corporate sentiment, while managing a Starbucks, as a way to explain away their frustrations. (Inspired by President Obama) 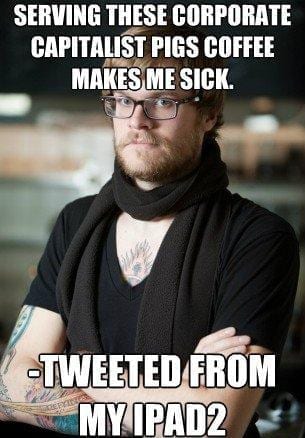 What often gets lost in this debate is why we have the Second Amendment in the United States. Why would the founding fathers want the citizenry to be armed?

Let’s dig deeper, what is the Constitution? What exactly are a bunch of laws ratified by a group of independent states?

What form do laws take? Are they written? Written on what?

So, if the constitution is just a bunch of words on paper, how can we ensure that the terms of the agreement are carried out?

Such as the freedom of speech, religion, or press? How about stopping the government from illegally searching and seizing your property?

Maybe now you understand why bearing arms is essential to each and every individuals freedom. As George Washington once said,

“Firearms stand next in importance to the constitution itself. They are the American people’s liberty teeth and keystone under independence.”