Lenz: A Letter From My White Perch On Privilege Mountain 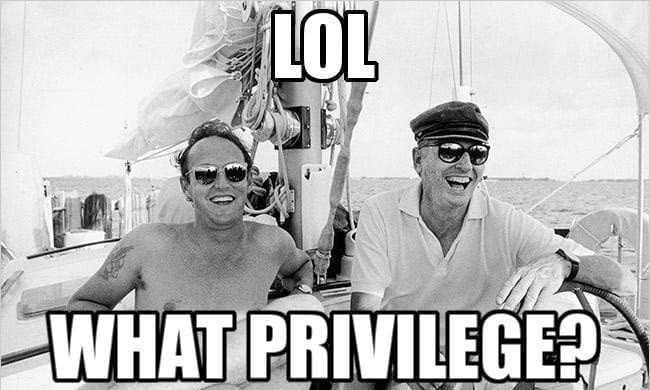 As you already know, Officer Darren Wilson was not indicted and Ferguson, Missouri in in flames.

Whether you feel the protesters are right or wrong, the real question is,

Does anyone believe for a second that lighting Ferguson, Missouri on fire will have any lasting change of police brutality? (If you do, please write me)

I only ask because I made the mistake of responding to a Facebook post by a friend that read, “Why is it we can never get past the color of our skin?”

Being the consummate millennial, I felt a sense of responsibility to respond. Who am I to rob her of my brilliant analysis and prediction? And who better qualified than myself, a white suburban raised male, to offer insight into the plight of the disenfranchised?  So undeterred, I pressed on like a duty bound slave…

My comment: Because it’s one of the last remaining things that will get voting blocks to show up at the polls. Need GOP turnout? Talk about the Hispanic infiltration of America and cultural decay to blue haired old ladies. Want to increase Democrat turnout? Organize protests about police brutality. People make millions of dollars and receive admiration, usually reserved rock stars, if they can deliver votes on election day. Until the American electorate becomes desensitized to race, it will continue to be the unhealed wound of American history.

Her response: By desensitize, do you mean ignore? Because last I checked racism was very extant, very buried and INDEED ignored. Without the help of influential voices such as celebrities, politicians and activists bringing light to it, the world would not be hearing the oppressed and unjustly treated voices as they are today. You are right in saying that these wounds haven’t healed, but being quiet about them does nothing but continue to let them fester. The reason that racism exists is because racism is still a deep-seated and actively apparent issue in today’s society, not because people talk about it too much and therefore perpetuate its existence, but rather because people are ACTUALLY still being mistreated, misjudged, shot, and eventually killed from it.

My rebuttal:  I do, it’s time to ignore it. Sorry to sound callous, but society, in my opinion, is WAY beyond the point of caring. We live in a social media world, and in that world, persistent advocacy becomes annoying and self-defeating. I personally believe Ferguson is a justified reaction to a racist corrupt system. All social science data would point to that conclusion and tonight’s nationwide protests are pretty clear evidence that certain communities believe there’s little to lose by fighting, even tearing down, the system to which they are subjects.

However, what remains to be done? Reparations, grants, scholarships, money for schools, community reinvestment, and every other attempt at social engineering has failed disenfranchised communities because, they are in fact…disenfranchised. What will work, is hyper-local community governance. If the individuals in Mike Brown’s neighborhood governed and policed the area, he would still be alive. Instead, a racist system killed him. However, self-governance will remain a pipe dream until people become desensitized to the race war.

Any voting resident of Ferguson watching CNN tonight would have to be crazy in order to vote to relinquish governance of the effected areas, because they don’t trust the protesters (whether for racist reasons or not) to keep the area safe. Why would they after tonight?

Or over the next few weeks after being bombarded with angry round table discussions about racism? Does racism exist? Yes. Maybe more so than ever, because it’s probably institutionalized, but until the majority of the American electorate begins ignoring the race war, and forgets about it to the point of having to look it up on Wikipedia, voters are only going to become more fearful and want to increase the the authority of law enforcement when dealing with the disenfranchised.

2) The protesters can come to terms with the fact that change will come from self-governance.

In a democracy, self-governance is achieved bit by bit by earning the trust of the other voters. During the friendly back and forth it occurred to me that if the disenfranchised are serious about fulfilling Martin Luther King Jr.’s dream, they aught to quit funding social scientists in their quest for the Lost Ark of Racism, and start spending money on public relations firms capable of lulling voters into a ripe state of blissful ignorance, so you can persuade them to support your cause.

So, what’s the point of last night’s destruction?

Protests and outspoken advocacy methods have reached the point of diminishing returns. The challenges that lay ahead of the liberty movement will only succeed if we master the tide of public opinion and avoid the flames of Ferguson.

Last night’s protesters made every liberty lover’s job much, much harder…