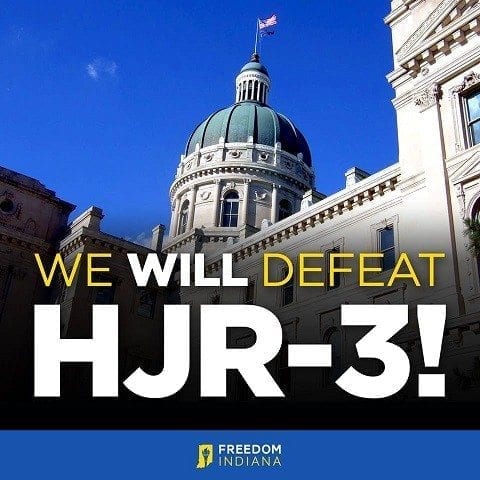 What we witnessed two days ago was not an act of careful deliberation, but an act of cowardice by a group of individuals who will go down in annals of Indiana history with the likes of D.C. Stephenson and Edward Jackson.

The world is a very different place now. Man possesses the ability to create the beginnings of the very universe he inhabits and under the laws he deems fit. And yet the same beliefs for which our forebears fought are still at issue in our state. The belief that the rights of man come not from the generosity of the state, but from man himself.

Now I am not familiar with your particular religious affiliations, but in case you are Christians for political purposes only, and ill versed in the scripture, I will turn your attention to the author of the Declaration of Independence. I doubt there is one among you unfamiliar with Thomas Jefferson. A man whose wisdom and intellect was so revered that President John F. Kennedy once said to his cabinet members about Jefferson,

“I think this is the most extraordinary collection of talent, of human knowledge, that has ever been gathered at the White House – with the possible exception of when Thomas Jefferson dined alone.”

Needless to say, Mr. Jefferson’s insight into the separation of church and state may hold more influence than your own. In his letter to the Danbury Baptists Jefferson wrote,

“Believing with you that religion is a matter which lies solely between Man and his God, that he owes account to none other for his faith or his worship, that the legitimate powers of government reach actions only, and not opinions…”

After reading that quote, from a man of such preeminence, how can any of you act in such an impudent manner?

To my knowledge, and full disclosure I have not exhaustively researched your backgrounds, none of you are or have been:

-The Son of God

-Author or Signer of the Declaration of Independence

-US Secretary of State

-Vice President of the United States

-President of the United States

-Founder of a top 5 US Public University (University of Virginia)

*I sincerely apologize if you have achieved one of the aforementioned accomplishments, and in the course of my comprehensive research, I failed to give you proper divinical or political recognition. For the sake of the argument, lets assume you have not.

It would appear that Jesus Christ and Thomas Jefferson’s opinions on the separation of church and state carry more weight than your own, the Republican Party of Indiana, or the voters of Indiana. But then again I am an absolute slut for credentials.

However, even Jefferson himself said that the legitimate powers of government reach actions only, not opinions. I suspect even he would be opposed to his personal beliefs influencing legislation. So how did we arrive here? How did we come to the conclusion that marriage belongs to the state?

Christians like to claim that marriage is a “divine institution” and argue the state stole marriage from the church. Those individuals should read a history book.

Marriage was neither connected to the church or to the state for much of human history. A marriage was defined by two individuals announcing their marriage to friends and family. Some newlyweds hosted a “wedding feast”, as depicted in the New Testament, but there was not a religious ceremony. Early Christian churches had nothing to do with marriage. They did not perform marriages.

The Church began seeking control of marriage in 1545 when the Council of Trent announced that marriages would no longer be recognized as valid unless a priest performed them with two witnesses present. Prior to that a marriage was considered valid if two individuals merely pledged themselves to one another.

It was in fact the church that stole marriage from the individual. Therefore the Christian argument, for a constitutional ban on homosexual marriage, hangs crucified. The evidence is clear. The state either stole or assumed marriage from the church, who was not the rightful owner.

If this were a criminal case, the government would be guilty of possessing a stolen good. They stole marriage from the church, who stole it from the individual. Seeing as how I am a reasonable guy, I will be lenient. I highly doubt there exists, within the Indiana state government, an individual of enough competence to perform a Google search on the history of marriage. So I will give the government the benefit of the doubt by exempting them from the “Should Have Known” principle.

However, I will not be so forgiving with respect to the church. The church knowingly took property that did not belong to them. God him/her/it/self said,

For you Old Covenanters: “Then the LORD God made a woman from the rib he had taken out of the man, and he brought her to the man.  The man said, “This is now bone of my bones and flesh of my flesh; she shall be called ‘woman, ‘ for she was taken out of man.”  For this reason a man will leave his father and mother and be united to his wife, and they will become one flesh.”  (Genesis 2:22-24)

For you New Covenanters: “Haven’t you read,” he replied, “that at the beginning the Creator ‘made them male and female,’  and said, ‘For this reason a man will leave his father and mother and be united to his wife, and the two will become one flesh’ ?  So they are no longer two, but one. Therefore what God has joined together, let man not separate.” (Matthew 19:4-6)

Not a single mention of marriage, ceremony, priest, church, or witnesses. God does say that when a man leaves his father and mother to be united with a female, said female becomes his wife. Once this happens the male and female cease to be two individuals. God clearly granted the power of man to turn a woman into his wife, but not much more. Therefore the historical definition of marriage, two individuals voluntarily entering into an agreement, seems to have a much stronger case.

If Christians do not want to marry same sex couples in their church, they can choose not to. However, I see no such evidence for the state to make such a decision.

When I claimed earlier that HJR-3 was a crime against humanity and God, I meant it. The church, acting outside of its authority, decided individuals could not be trusted with marriage. It was far too important of an institution to be left up to the individual. It must be properly conducted and administered by the religious elite. What could possibly go wrong?

Clearly the evidence is overwhelming. The church is guilty of stealing marriage. Sentencing is all that remains.

What shall the church’s penance be? Let us not be petty. Let us turn the other cheek.

The right way to remedy the church’s egregious theft is to return it to its rightful owner, the individual.

Governor Pence, Lieutenant Governor Ellspermann, Senator Long, Speaker Bosma, and fellow elected representatives, if you have made it this long please consider the facts. HJR-3 is not an issue of popularity. It is an issue of principle and that principle was relayed directly from God to Moses at Mount Sinai. So I shall refer you to commandment eight: Thou shalt not steal.

If that is not enough I am going to offer what I imagine Thomas Jefferson would have to say about homosexual marriage,

“It does me no injury for my neighbor to marry another homosexual, heterosexual, or anything in between. It neither picks my pocket nor breaks my leg.”

Governor and legislators, marriage is not yours. Marriage does not belong to the church. It belongs to each and every individual reading this post. It is a personal matter.

“The smallest minority on earth is the individual. Those who deny individual rights cannot claim to be defenders of minorities.”

So not only is a vote for HJR-3 a vote against God, it is also a vote against minorities. Do you really want to be remembered as a Godless bigoted thief? Heaven help you.