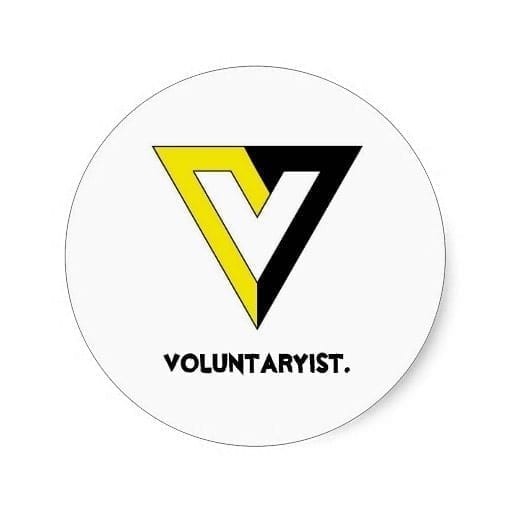 Voluntaryism is the philosophy that one becomes an advocate for when he or she learns to apply the Non-Aggression Principle and its doctrine of Equal Liberty consistently. It has nothing to do with the choices an individual makes, as long as that choice is consistent with the aforementioned principle and doctrine. Voluntaryism is not a political philosophy, though it can be adequately applied to politics, it is a philosophy that is essentially one’s lifestyle. An individual who has no desire to engage in political discourse can be a Voluntaryist, so long as they do not impose their particular beliefs on those who wish to be politically active. Even to an extreme, a tyrant of a commune could also be a Voluntaryist; as well as those who willingly submit to the will of his dictate. By their own volition, they both fit the description of a Voluntaryist. This extreme means he or she who forces freedom and individual liberty is technically the authoritarian (commonly referred to as the liberty-monger).

The root word of Voluntaryism is volunteer, and in every possible context a volunteer is simply understood as “a person who offers to take part in an enterprise or undertake a task by their own free will or choice; a person who willingly gives consent.” That’s a simple definition, but obviously it is an elementary term that is still misunderstood by many, which includes American politicians, college professors, students, judges, officers of the state, and sadly even those who claim to be Voluntaryists.

I now wish to address that which is sad, and also counter-productive to the advancement of liberty.

“Each faith, each ideology, tends to deviate from its original ideas, sometimes in a quite fundamental way and usually without most members being aware of what has happened.”

The notion that anyone who holds a set of religious beliefs cannot be a Voluntaryist is not consistent with the philosophy of Voluntaryism itself, and is in fact boldly fallacious. Whether one believes in many gods, a single god, or in an unlimited benevolent government has little to no effect on their philosophy being voluntary. The act of telling other people what they can or can not believe, or what they ought to believe, as if that were the prerequisite for being a consistent Voluntaryist, is actually imposing one’s will on other people, and that force is antithetical to the principle of non-aggression. Any individual who willingly decides to practice a religion without infringing the equal liberty of someone else, has done absolutely no harm, and to impose one’s will on them would be to violate their liberty of conscience.

This was a position taken up by one of The Levellers in Seventeenth century, Richard Overton who wrote: “No man hath power over my rights and liberties, and I over no man’s.” Considering our history, if we aim to be Voluntaryists, true to form, our resistance is not against hierarchies or those who believe in a supreme being at the top of those hierarchies; Nor is our resistance against those who place a government at the top of those hierarchies, while it treads heavily upon their liberties. Throughout history, Voluntaryism has propagated alongside many great differences of beliefs, tastes, and perspectives, but the core tenet of Voluntaryism was neither collectivism or conformity. Long before the word Voluntaryist had even been branded, or The Aim of the Voluntaryist had been locked in; even long before the era of The Levellers and The True Levellers (Both had very different opinions on politics and governance, but surprisingly both had religious beliefs); even before the 1530′s when Etienne de la Boetie wrote The Discourse of Voluntary Servitude, the core tenet was no different. Voluntaryism is deeply rooted in voluntary associations, non-aggression, and whether or not we give our consent to being governed by others against our own free will.

Timothy Voluntaryist Fogle is a first time Guest Contributor at We Are Libertarians. This piece was originally posted on The Autarchist.Papers – his personal periodical about the Libertarian philosophies of Voluntaryism and Autarchism. It has also been published by TheLibertarianLiquidationist.com.