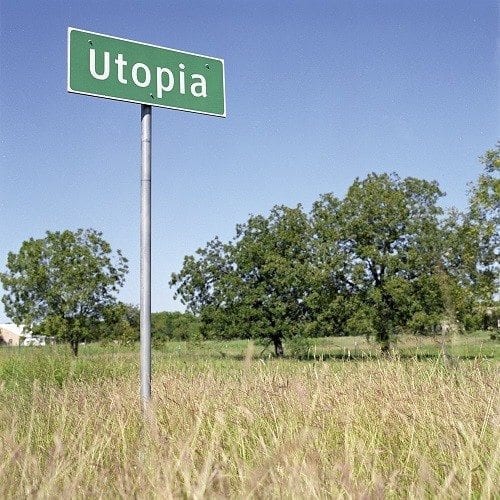 One of the most prevalent claims against libertarians is that their ideas are Utopian in nature, but this can only be construed as a bad thing if you use the definition given by Sir Thomas More. The word Utopia first came about in the 1500’s through the philosopher and author Thomas More. If one examines the book they would find that the mythical place described in the book Utopia is nowhere near its present day meaning and by all accounts would never form in a libertarian society. Presently defined as an ideal place or state it would fit the vision of libertarians. It is here that the separation of definition takes place from the fiction story to the present day definition.

Of the many themes in More’s description of Utopia, I want to compare two major areas as they are the very basis to individual liberty and libertarianism as a whole; Private Property and Self-Ownership. These two points in Thomas More’s fictional story are meant to lead to a Utopia or perfect world, but error on the basis on individual liberty. This is where the charge of libertarians being Utopian by the book’s definition, in their ideas and vision is completely false.

“In More’s novel Utopia has no money or private property and there is therefore no greed, power struggles, corruption, or vanity, and very little crime. Everything is held in common and everyone’s needs are supplied” [1].

This is nowhere near a Libertarian stance. The existence of property owned by the state has never been a view expressed by the Libertarian philosophy. Private ownership of property leads to the owner feeling a sense of personal investment in the maintenance and improvement of that property. When the ownership is transferred to the state that investment is not realized and the property is subject to abuse and quickly falls into disrepair and dilapidated. Simply look into your local public housing projects to see this effect in comparison to a area of high private home properties.

In the modern day definition of utopia, a libertarian society would be centered around the Right of Private Property and its protection.  As Ludwig von Mises once stated, “If history could teach us anything, it would be that private property is inextricably linked with civilization.” Private ownership of property is one of the fundamental tenets of libertarianism. It leads to the production of goods and the means of labor to produce those goods. It is this ownership that allows individuals to create homes and businesses.

In More’s description of his utopia he includes the custom of owning servants or slaves, Labeled as “bondmen”, these unfortunate people are owned by others to be put to work in the home and wherever else needed. In no way does this represent the libertarian view of self-ownership. The belief that you, and you alone, can own your body and the fruits of your labor and toil is a vital, central axiom of libertarianism and cannot, in any way be construed to include any sort of servitude or bond to another person.

Another point in this issue is the way in More’s Utopia there are authority figures set into every community and city; eventually leading to a central ruler and its court. This point is a little different in the Libertarian stance. Libertarianism is broad and a very large-tent term. It contains those that believe in the minimal amount of outside governance and also those that believe in no governance but self-rule.

How do you define the word Utopian? With the charge that libertarians are Utopian in their ideas one would have to differentiate the term from the classical to the modern.

In the classical sense, in no way, shape, or form would that type of society exist, or even begin to exist under the libertarian positions of Private Property and Self-Ownership.

In the modern day definition, a more perfect world, or a utopia could exist under a libertarian society. This begs the question though; shouldn’t this be wanted by all, and embraced by everyone?

With the modern definition being what it is, I must ask, if libertarians are Utopian in belief, what does that make the other party’s ideals? What is the purpose of all the added regulations, laws, rules, and restrictions? What are they working towards? Is it all for the ultimate goal of total control? Of course these are rhetorical questions! I already know the answers.

Travis Wilson is a Guest Contributor to We Are Libertarians. He currently resides in Northeast Florida and is a libertarian activist. His other works can be found on his blog at the links below.

For more please check out Thejeffersonpapers.blogspot.com