“Problem-solving is hunting; it is savage pleasure and we are born to it.” -Thomas Harris, Silence of the Lambs

There is something addictive about solving a problem. Lately, I have found myself pondering the same problem over and over: If man desires self-governance, why does he so readily embrace the shackles of collective governance? Where are the men who refused to be governed and succeeded?

I refuse to believe that man is unfit for self-governance, but to the casual observer, it would certainly appear that way.

In a rare moment of clarity, while crafting solutions to my own problematic New Year’s resolutions, it occurred to me that it is not that man is ill suited for self-governance, but that man is addicted to solving problems. After all, man is a hunter. The satisfaction of creating and implementing a solution is so satisfying one must continue on in their pursuit of that next high.

Where does the problem solving addict go to find his next conquest? The world around him. His addiction sends him on a never ending chase for bigger and bigger problems to solve so he can feel that psychological high. Eventually he loses all sense of self-awareness. Questions such as, “Is this really a problem? Who am I to think I can solve this problem? Are the benefits gained by solving this problem worth the cost?”, are long forgotten. His chase devolves into hubris and his hubris leads to folly.

Abraham Maslow once wrote, “I suppose it is tempting, if the only tool you have is a hammer, to treat everything as if it were a nail.”

I suppose it is fitting an academic issued such a prescient statement about the human condition. Academia is to the problem solver as the Chocolate Factory is to Willy Wonka. The land of the theoretical and consequence free experimentation. It is a place where ideas reign supreme. In the academic world, all of human existence is a nail in need of a mental hammer.

-the meaning of life: philosophy

It is a place with little emphasis on humility, pragmatism, or consequence.

Technological and economic progress have benefited man with incredible gains, but what if those gains stand between mankind and self-governance? Do you believe early man was contemplating the meaning of life while hunting for his next meal? I think Erich Fromm nailed it when he said,

“Man is the only animal for whom his own existence is a problem which he has to solve.”

Please do not misunderstand my position as one of anti-intellectualism or higher education. Man’s problem solving ability has led to incredible human advancements in both lifestyle and freedom. However, I think it is interesting to consider whether the gains from technological advancement are helpful in man’s quest for self-governance?

It certainly appears as if scientific breakthroughs have led to an increase in human freedom over time, but will mankind ever be able to collectively resist the allure of solving societal “problems” with government force?

Is the tree of knowledge an irresistible seductress or can we restrain ourselves from trying to perfect certain aspects of society?

Did it occur to the first man that merely by imagining government into existence he was creating a nearly indestructible social prison for his descendants? I doubt he could have fathomed government, once imagined, would transform into the monstrosity it has become.

In spite of humanity’s addiction, I remain optimistic. Over the course of human history there have been times when man considered not only his ability to solve a problem, but also whether or not he should. For far, far too long we placed unwavering faith in the ideas of the best and brightest. These intelligent designers of society were the same individuals that,in 1980 created the Department of Education. They were so confident they could improve a public education system producing the number one ranked students in the world, without any federal direction, that they created a federal pathway to solve a non-existent problem. Here’s a chart showing the explosion of federal education spending since 1980: How about President Lyndon Johnson’s Great Society and the War on Poverty? 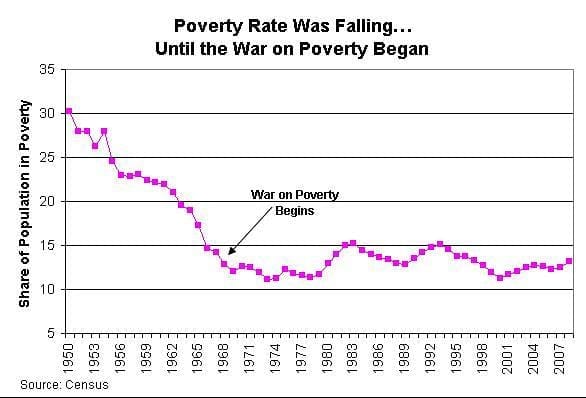 Why did we spend SO much on education and poverty for such atrocious results? The grand architects of society, with their ever faithful belief in the scriptur…I mean academic research, were confident they had the perfect solutions to our problems.

It’s 1959 and an ambitious junior senator from the state of Massachusetts wants to run for President. What does he do? He puts together a group of the best academics in Boston and anoints them the “Academic Advisory Group”. The ambitious Senator and his group of advisers begin crafting a comprehensive economic and poverty relief program to run on. If they had only taken one second to consider whether they were ready to bear the responsibility of recommending policies that had a devastating effect on lower socioeconomic classes.

Did they ever apologize to anyone for creating an inter-generational culture of dependency? How about an explosion in poverty and desperation?

On November 8, 1960 at the Democratic National Convention he accepts his party’s nomination and delivers a speech that came to be known as the New Frontier speech. In it he laid out his vision for the future and recommended policy prescriptions put together by his Academic Advisory Group.

Two dozen men in a Boston hotel room in 1959 were responsible for spending 15,000,000,000,000 dollars over the next 50 years to wage a War on Poverty that had ZERO effect on alleviating poverty by any calculable statistic.

The Department of Education was created under President Jimmy Carter. Its purpose was to administer and distribute funds to public schools and to begin collecting data on students for academic research purposes. Since he signed that bill into law we have spent 2,300,000,000,000 federal dollars on education.

Keep in mind, prior to the founding of the Department of Education, we had the number one ranked students in the world.

Now, we’re 29th. Maybe if we get more research data we can get everyone down to Detroit’s literacy level: 48%? Maybe paying teachers more would do the trick?

In 1959, if the Academic Advisers Group had never assembled in Boston and twenty-one years later a group of education researchers had not tried to fix the best educational system in the world, our national debt would be 60 billion dollars.

That number is equal to just under 6 days of US daily spending ($10.46 Billion). Please think about that.

To put that in perspective, if we had a true government shutdown for 6 days, our country would be debt free…If it were not for that group of highly intelligent, well educated individuals on a mission for a problem worthy of their solving.

Going forward we must demand a discussion on two things:

1) Are individuals even capable of intelligently designing society?

2) Should we play God with government?

History has shown that the majority, consistently dismisses the possibility of self-governance. It’s a topic that was once too radical for consideration. But as Dylan once said, “The times they are a changin.”

Edward Snowden, Julian Assange, Ukranian protesters, and the U.S. government’s complete lack of ability to build a functioning website have caused even the most skeptical among us to reconsider faith in government institutions. So, the next time someone tries to lecture you about Common Core or a new twist on welfare policy that was designed by a Harvard sociologist, remember this post.

I want you to ask them if they believe God created the universe 6,000 years ago in 6 days.

If they answer yes, at least they are intellectually honest.

If they answer no, I want you to point and laugh in their face. They deserve to be mocked. They are delusional Peter Pan Utopians and they are dangerous to human freedom. It is the pinnacle of arrogance to try and treat all of U.S. society as if it were a Sims game completely devoid of consequence.

Should anyone be forced under the dehumanizing control of social engineers?

Forced to subject our children and grandchildren to academic fads likely to be discredited in the following year?

Don’t worry, just tell your child or grandchild to forget their horrible experience. I’m sure the next policy proposal will be the panacea we have all been waiting on. Self-governance is the next step in human evolution. Its the only form of government that treats people like valued individuals worthy of respect and compassion, instead of soulless beings designed to be optimized for peak societal benefit. Self-government is possible, but in order to do so we must learn separate society’s problems from our own.

So seeing as its the time of year for New Year’s Resolutions I am going to make a few now:

3) Learn to more thoroughly enjoy the diversity of human existence. For too long I have thought of society as a melting pot. It’s more of a hearty rich stew with many distinct flavors and a weak broth of common bonds.

4) Don’t let them immanentize the eschaton!

5) Invade Canada, fix it up, and flip it to Russia. Let’s see how they like Putin…