The Flaw of Bitcoin

Bitcoin is a fixed virtual currency. Currently 12 million of 21 million Bitcoins are in circulation. It’s value is measured in relation to US dollars or whichever corresponding fiat currency you wish to use as a standard of measurement. Because the unit of measurement is not fixed (central bank issued currencies), Bitcoin’s value is subject to two types of valuation pressures:

1) A hard limit: meaning that as supply decreases it’s price will increase assuming demand for Bitcoins stays constant. If demand increases, then the price of Bitcoins will increase even more. 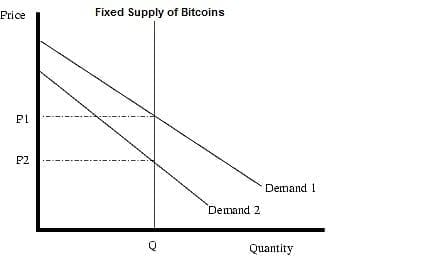 2) Relational value: fiat (paper backed) currencies are not subject to hard limits, so as central banks increase the amount fiat currency available, Bitcoin’s price should correspondingly rise with any increase in fiat currencies. 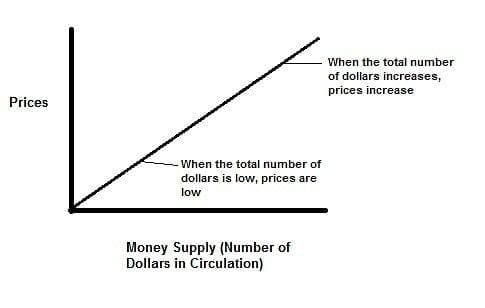 To sum things up, as the number of unmined Bitcoin’s availble begin to decrease, the price of available Bitcoin’s will rise. If demand stays the same, but supply decreases, then the price of Bitcoin will rise. In addition, because Bitcoin’s value is measured in relation to paper currencies, which aren’t’ limited by supply constraints, the value of Bitcoin will rise necessarily in accordance with the increase in supply of paper government issued currencies (money printing). These two things mean that individuals who own Bitcoins will see a rise in the value of those Bitcoins.

Is that a good thing?

Yes and no. For people who have Bitcoins it is a great thing, but if Bitcoin is going to replace government backed fiat (paper) currencies it will end up being a bad thing. The reason?

You might be saying, “What the hell does hoarding have to do with Bitcoins?”

Well think of this hypothetical situation:

A neighborhood consisting of 8 couples and small children are tired of paying exorbitant prices for babysitters. They decide to voluntarily create a babysitting voucher system for their neighborhood. Each couple gets 8 vouchers for babysitting services that can be used anytime with any other couple in the neighborhood during the year.

There are 64 total vouchers available in this neighborhood babysitting economy. The system works well over the course of the first year, but the Jones family recognizes the flaw of this system as it is implemented. They decide to not use any of their vouchers the first year and decide they won’t turn down any opportunity to earn vouchers in that year. They end up with 40 total vouchers. What happens?

Neighbors begin realizing how scarce those vouchers have become in the following years. The Joneses are now holding a currency that has become as asset. The longer they hold onto those vouchers, the more they rise in value.

The Jones begin receiving cash/gift offers to purchase their vouchers. The Joneses, being long-term investors, reject all offers knowing that as long as this system stays in place, they will continue seeing the value of those vouchers rise.

What began as a currency (vouchers), has now become an asset. This is not what was intended. Other neighbors start hoarding their vouchers because they too are beginning to receive cash/gift offers. The neighborhood babysitting economy grinds to a halt. The speed at which those vouchers change hands plummets. In the real economy this is known as the velocity of money.

The velocity of money is a measure of the economic activity of a nation.  It looks at how many times a unit of currency ($1 in the United States) flows through the economy and is used by the various members of a society.

Here’s an example of why the higher the velocity of money in an economy is, the better it is for an economy:

Imagine that a farmer, a grocer, a doctor, and a scientist live in the world’s smallest country. Between all of them, they have $1,000 in money supply. Over the course of a month, the following transactions take place:

If Bitcoin becomes an asset, then people will stop using it at as means of exchange. Some of you may be crying foul and calling me nuts, however, the reason currencies came into existence is because they were a more efficient means of exchanging goods (government created or not). Do we really want to go back to a barter system where we exchange chicken for cow? Just so we can say we’re not acknowledging the state’s authority over us?

Of course not. What all individuals trying to limit state power should be trying to do is create a currency free from government control and manipulation.

That’s why I believe Bitcoin, while being an AWESOME improvement over government currencies, is still short of what we want to create. As long as it can be hoarded and used as a wealth creation tool, it won’t help us in the long run. We need a digital untraceable currency that has an automatic annual increase. I propose we create a Bitcoin replica that has an automatic 2% annual increase.

In the babysitting example, if the Jones family knew their vouchers were guaranteed to decrease in value over time, they would be more likely to use them, thus increasing the velocity of money in the neighborhood babysitting economy and the overall health of that economy.

Now, somebody go out and create that currency! I wish I could, but its beyond the scope of my abilities. I’d be more than happy to assist in any way possible. Feel free to contact me: Lenz@WeAreLibertarians.com