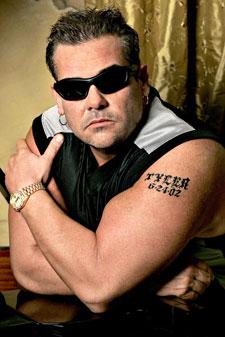 “Congress shall make no law […or abridging the freedom of speech, or of the press; […].”

There is a reason that the First Amendment encompassed as many freedoms as it did. It allowed for us to live our lives as individuals. However, public figures are open to a different level of scrutiny than the private citizen. Public figures, be it the President of the United States, athletes, movie stars, or rock stars, are often the focus of punch lines on Saturday Night Live, South Park, or during one of Jay Leno’s monologues on the Tonight Show. What you probably don’t know (because the mainstream media didn’t report it), is that all three have recently been under attack in a Florida courtroom.

The best way to describe Bubba The Love Sponge® is either, “I love him,” or, “I hate him.” (Side Note: His name IS trademarked. In almost any search you will find the encircled ‘r’ next to his name).

Bubba the Love Sponge® has been broadcasting all over the country from Terre Haute, Indiana to Grand Rapids, Michigan. He also hosts a syndicated show from his self-sustaining studio in Tampa, Florida. Now, like other “shock jocks” Bubba has drawn the FCC’s attention for objectionable content during his radio programs. In fact, to date he has the second largest FCC fine in history at $755,000 for playing material over public airwaves that, according to the FCC, aims to “pander to, titillate, and shock listeners.” Now, one might wonder how a shock jock such as Bubba the Love Sponge® would defend our most sacred rights under the Constitution.

The year is 2008 and Bubba and his crew are coming back to terrestrial radio due to their success on Howard Stern’s Sirius Satellite Radio channel. During Bubba’s absence from the Tampa airwaves the top radio show was, “MJ in the Morning” hosted by Todd “MJ Kelli” Schnitt. Within 30 days of their return, the Bubba the Love Sponge Morning show was number one. Before Bubba’s return, MJ Kelli reported that Bubba “Wants to start a radio war with me so he can reintroduce his clown act to Tampa.”

That feud began when Bubba’s show referred to MJ’s wife a “whore” during one of their broadcasts. MJ took the word personally and told the morning show that Bubba may have meant it in a sexual way. Bubba was trying to portray his wife as a person who was a constant contributor to the show and thus both argued the context of the word.

MJ’s position was that his wife was a private person and could not be defamed. However, information came out that she was not only a person who participated in multiple phone calls to his program, but also that she worked for the state attorney’s office. Other bits of audio accused MJ of rigging a contest, engaging in payola, and “cooking the ratings books.” In 2008, Todd “MJ Kelli” Schnitt filed a lawsuit against Bubba the Love Sponge® and his parent company, the Bubba Radio Network (BRN), for slander and defamation.

Over the next several years there would be depositions based on all audio that Bubba and the rest of the show played. MJ Kelli paid a person on his show to listen to Bubba’s show, transcribe the audio, and then use it to file depositions to help gather evidence for his case. Many songs, parodies, and bits created by Bubba’s show to “poke fun” at him for being, “a midget, no talent hack and having a pubic hair afro on top of his head.”

Bubba was using this as a First Amendment case because the show meant to entertain. The goal was to engage in theater of the mind. MJ Kelli even questioned what would go on when Bubba’s show when Bubba engaged in a “Price is Right” moment where all that would play over the airwaves was the theme song to “The Price is Right.”

It was up to Bubba’s attorneys Greg Hearing and Joseph “Jay” Diaco that stood up for Bubba and argued that this was a First Amendment Case. All Bubba was doing, according to Hearing and Diaco, was exercising his rights to Free Speech. While MJ Kelli was on the stand Hearing and Diaco pointed out that though he was claiming harassment from the “Bubba Army” (Bubba’s fans and listeners), he did nothing to alter his lifestyle that might prevent him from being the focus of future insults.

From a pirate parade to a charity fundraiser, MJ Kelli still put his face, his name, and his wife’s face and name in the public eye. They had no other security at their public events, and admitted that Bubba’s only offenses were verbal insults. The only attack on their house was an egging where a “Bubba Army” note was left. This caused him to buy an $18,000 home security system. Hearing and Diaco inquired about why it took Schnitt 12 days to call the police to file their report.

After 5 hours the jury returned from deliberation on 48 separate grievances of Bubba and whether he and his company had defamed Todd Schnitt and/or his wife. They eventually answered “not guilty” to every charge.

Now you would think that this would be the end of it.

However, during the trial the lead attorney for Todd Schnitt, one Phil Campbell, was arrested for a DUI. He is now accusing Bubba’s legal team of setting him up. As of today the judge is leaning to rule the case a mistrial. This would mean that the entire case would have been retried.

Bubba’s case is about more than his feud with MJ Kelli. Bubba’s case is indeed about free speech and the Constitutional rights that we are supposedly guaranteed. Will the First Amendment stand firm? Will SouthPark continue to be able to parody anyone and everyone? Will Saturday Night Life be able to continue celebrity mocking in parody skits? Will Jay Leno continue to get laughs telling a joke about the President?  Only Time will tell.

Guest Submissions can be sent to Ruiz@wearelibertarians.com. Please provide links to any sources cited in your submission. Every variety of libertarian thought is welcomed. However, We Are Libertarians will maintain a standard of professionalism and as such will not accept pieces based solely on conspiracy theories and/or  pieces that are overly obscene. We look forward to your contributions!  – Joe Ruiz, Managing Editor