Confederate Statues, Funding For the Arts, and Left/Right Hypocrisy

I can sympathize with both sides here.  Monuments, even of bad events or people, shouldn’t necessarily be forced to be taken down.  However, people who have no desire to fund a particular monument or statue shouldn’t be forced to fund it.

The libertarian solution is pretty simple, but before I delve too deep into how this can easily be solved with libertarian principles, I’d like to look at the hypocrisy on both the right and left that this controversy has exposed.

For his 2018 budget, Donald Trump is planning on eliminating funding for several federal programs that subsidize the arts.  Including the National Endowment for the Arts (NEA).  The response from republicans is overwhelmingly positive.  The main reasoning for right wing support was summed up by White House Budget Director Mick Mulvaney:

“Can we really continue to ask a coal miner in West Virginia or a single mom in Detroit to pay for these programs?” he asked. “The answer was no.”

So this week it was interesting to see Trump abandon this logic when it came to the removal of publicly funded Confederate art.  He had this to say on Twitter: 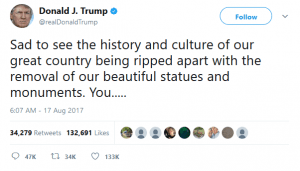 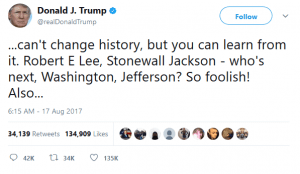 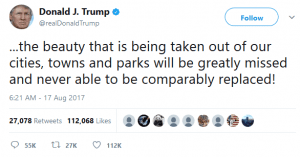 Nowhere did he say that public funding should be cut for these statues and nowhere did he echo Mulvaney’s point about it being wrong to make a “coal miner” or “single mom” pay for these Confederate Monument Programs. As usual in politics there’s no principle, only tribes.  The right wing tribe views the NEA as overwhelmingly subsidizing liberals and their pet art projects.  On the other hand, they have no problem using public funds for monuments and statues that glorify people and events that liberals hate and conservatives are more likely to enjoy!

Going back to Trump’s proposed budget cuts to the arts, there’s no shortage of left wing outrage.  It’s hard to find anyone on the left who favors cutting government funding to any arts programs.  But therein lies the hypocrisy.  Aren’t Confederate monuments art?  Regardless of any objectionable actions taken by the Confederates, many of these statues and monuments can be seen as aesthetically pleasing, right?  I’m sure many local artisans were paid well for their work in creating these monuments, what liberal could object to that?

It’s easy to see how people who’ve had ancestors suffer through slavery would object to Confederate monuments, but many religious conservatives could easily object to some of the risque art that’s been funded through the NEA.  Additionally, if democracy is to be held up as an ideal, a majority of Americans believe the Confederate monuments should stay!

To this end, all funding to the NEA and any similar government programs should be cut immediately.  If you happen to value the type of art that the NEA funds, you are free to donate your own time and money to support these artists and galleries. Similarly, all publicly funded monuments and statues should be defunded.

Additionally, all statues and monuments should be sold off to the highest bidder.  Are you a person who hates what the Confederacy stood for?  Do you want to see these statues destroyed?  Great, I’m sure there will be many fundraisers to buy and destroy these statues.  Are you a Confederacy lover and do you want to see these monuments preserved?  Awesome, there will be plenty of fundraisers to buy and preserve these monuments as well.  You can fund any project you want, or no project at all.  The revenue generated in these sales should then be given back to the taxpayers they were taken from.

The tragedy of government funding the arts is that we are all forced to pay for art we may never view and in some cases we’re forced to pay for art that we find terribly objectionable.  This forces people to take sides and fight, since whichever side wins gets to control where the funds go.  Conversely, whichever side loses has to suffer the consequences of their conqueror possibly using the spoils directly against them.

The libertarian principle of non-aggression tells us that you have no right to force others to pay for your wants.  The libertarian principle of private property tells us that others have no right to stop you from pursuing your own wants on your own property or with your own money.  The beauty of these principles is that it allows all of us to directly fund and pursue the art we personally find enjoyable and important, and it allows those of us that don’t particularly enjoy art to use our funds for something that we do enjoy.

Originally published on Mike’s website here.  Check out his blog levelheadedlibertarian.com for more!

You may also like these other posts by Mike Tront:

Trademark Law, The Chicago Cubs, and Welfare for Billionaires