Walter’s life comes to a halt when he finds out that he has lung cancer. In order to pay the bills, he recruits one of his former students to help him produce and distribute methamphetamine. 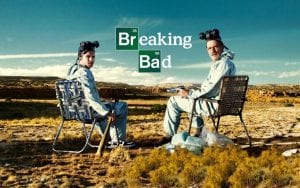 Walter and his accomplice, Jesse Pinkman, attempt to cook crystal meth in the New Mexico desert without anyone finding out – especially Walter’s brother-in-law – Hank, the Drug Enforcement Administration agent.

I started re-watching the series because 1) I love the story line, and 2) I wanted to catch any “Big Government strikes again” moments that I might have missed since the series ended in 2013. Without even making it halfway through the series, I realized that there were far too many to even mention in just one article.

Those watching can’t help but feel sorry for Walter – the cards are stacked against him. When his doctor tells him that he has lung cancer, his wife is out of work and is about 5 months pregnant. His son is an angsty teenager who just so happens to have cerebral palsy. We learn that Walter is an extremely overqualified chemist that is making about $43,000 a year. In order to make ends meet, he works a second job as a car wash attendant.

It’s crazy the amount of road blocks Walter, and those around him, have to face because of Big Government. The obvious drug war aside, Walter encounters tons of red tape when it comes to health care, health insurance, wrongful search and seizure, and my personal favorite, getting ticketed for a broken windshield.

In the second season, two planes collide over Albuquerque and as a result, debris from the wreckage falls all over the city. Walter’s car is hit with small plane parts, and the windshield cracks. While driving down the highway, a police officer pulls Walter over. Perplexed because he had the car on cruise control, Walter asks what the problem is.

The officer simply replies with, “Your windshield is severely cracked and is therefore unsafe to drive.”

Walt explains to the officer that his home was in the area where debris had fallen and that it was an extremely well-known news story. He even points out that the officer is wearing a ribbon pinned to his uniform in honor of the flight victims. The officer says that he understands…but the windshield is cracked and is still still unsafe to drive, so he has to give him a ticket.

Walt reacts the same way most people probably would in that situation – he goes ballistic.

In what world should he or any other citizen be punished by Big Government for the mess ups of others? And better yet, who is supposed to pay for his windshield? Even if Walt wasn’t rolling in drug money, replacing something like that would definitely set a family back for awhile.

This reminded me of plenty of real life examples that Americans have seen recently, especially in Flint, Michigan.

Like the drug wars, which arguably caused Walt to start cooking meth, Big Government caused the water crisis in Flint. The citizens of Flint are paying for the incompetence of Big Government with their pocket books and sadly, their health. Most people in the area, especially children, have lead poisoning and are abandoning their homes. The example in Flint, sadly, isn’t the first and won’t be the last in government incompetence when it comes to one of the most basic necessities like water.

Late last summer, an EPA-contracted firm released millions of gallons of toxic sludge into the Animas River, a critical source of water for the Navajo nation. Fast forward six months later, and the EPA still hasn’t taken responsibility for the disastrous spill.

More often than not, Big Government comes in with good intentions and leaves with bad outcomes. ‘Breaking Bad’ is a fabulous piece of television that helps to expose those who are not familiar with the liberty movement of the negative aspects of government overreach.

While an undergraduate, she served in multiple leadership roles, including President of the Student Government Association, a nominating committee member for the Indiana Commission for Higher Education and for the Ball State University Board of Trustees Student Member appointment.

Her dual degrees have allowed her to report on a variety of topics with many forms of multimedia. She has been a contributing writer for media outlets in Indiana on subjects like sports, entertainment, politics, religion, art, culture, health and science.

She divides her spare time between volunteering, fundraising and mentoring for the Miss America Organization, the Arthritis Foundation and the Hugh O’Brian Youth Leadership Organization.