A Libertarian’s Experience At a Donald Trump Rally

The music is blaring. The crowd is on fire. A voice from behind the black drapery announces Donald J. Trump in a fashion, more fitting of game 7 of a Michael Jordan Era NBA Final, than a political rally.

And now, at frontrunner and leading delegate holder for your Republican Party, standing 6’3′, the man who wants to Make America Great Again: Donald J. Trump. (Cue the jock jams and raucous applause)

Regardless of your political affiliation, a Donald Trump rally is a can’t miss event. For a man with a flair for the dramatic, his events are a natural extension of his persona. He takes the stage as a warrior returning home after a successful battle in a far away land. 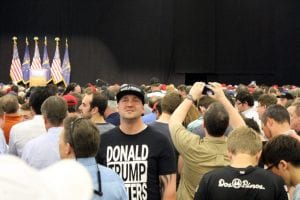 In some ways, he’s an untouchable hero and in others, the folksy neighbor next door. It’s quite the potent mixture. What’s undeniable about his events are the presence he has. In my lifetime, I’ve never experienced a politician who can command an audience like him. His message rarely changes, nor do his attacks on opponents, but he shows an ability to improvise and read the audience like a master entertainer. He never steps on a joke and he never tries to oversell a passionate moment until it’s certain the reaction he wants will happen.

Perhaps more impressive than his ability to read an audience, is his very skilful performance as crowd conductor resulting in the largest of crescendos. Trump is one part populist firebrand Huey Long, one part stand up comedian, and one part plain-spoken analyst on the absurdities of modern political debates.

On matters of policy, it’s easy to lose the nuance within the raw packaging.

-Immigration: the wall is clearly a matter of trade policy. He’s positioned himself as the tireless advocate of the blue-collar male most effected by the downward effect on wages undocumented immigration has had on entry-level and labor intensive job markets.

-Foreign Policy: He’s oddly non-interventionist in person. He speaks about how dumb the war in Iraq is and how he wants a strong military he hopes to never have to use. In the event he does, he lays it on thick with rhetoric designed to scare enemies like ISIS.

-Fairness: He calls out a corrupt delegate process within both political parties just as he calls out the lack of fairness in US trade deals

-He proudly speaks of his independence from outside interest due to his willingness to self-fund his campaign.

-He attacks a partisan press by having his crowd turn and boo them, yet he walks it back knowing his success is entirely dependent on their coverage.

For all Trump’s negatives from a libertarian perspective, his event was enjoyable.

The crowd was roughly 70% men and 30% women. They were shockingly more white collar than blue, and I’m sure I surprise no one in reporting the diversity of the event is best described as Fifty Shades of White.